• Amines: Amines are regarded as derivatives of ammonia in which one, two or all
three hydrogen atoms are replaced by alkyl or aryl group.

(i) By reduction of nitro compounds: Nitro compounds can be catalytically reduced by
passing hydrogen gas in presence of Raney Ni, finely divided Pt or Pd as catalyst at room
temperature.

Nitro compounds can also be reduced with active metals such as Fe, Sn, Zn etc. with conc.
HCl.

(ii) By Hoffmann’s method (Ammonolysis of alkyl halides): Reaction of alkyl halides with
an ethanolic solution of ammonia in a sealed tube at 373 K forms a mixture of primary,
secondary and tertiary amine and finally quarternary ammonium salt. Process of cleavage of
C-X bond by ammonia is called ammonolysis.

Method is not suitable for preparation of aryl amines because aryl amines are relatively less
reactive than alkyl halides towards nucleophilic substitution reactions.

Aromatic primary amines cannot be prepared by this method because aryl halides do not
undergo nucleophilic substitution with potassium phthalimide.

Greater Kb value or smaller pKb indicates base is strong.

(ii) In aqueous solution it is observed that tertiary amines are less basic than either primary
or secondary amines. This can be explained on basis of following factors:

On the basis of solvation effect order of basicity of aliphatic amines should be primary
amine>secondary amine>tertiary amine.

this case order of basicity in aqueous medium is

In the above resonating structures there is a positive charge on nitrogen atom making the
lone pair less available for protonation. Hence aniline is less basic than ethyl amine which 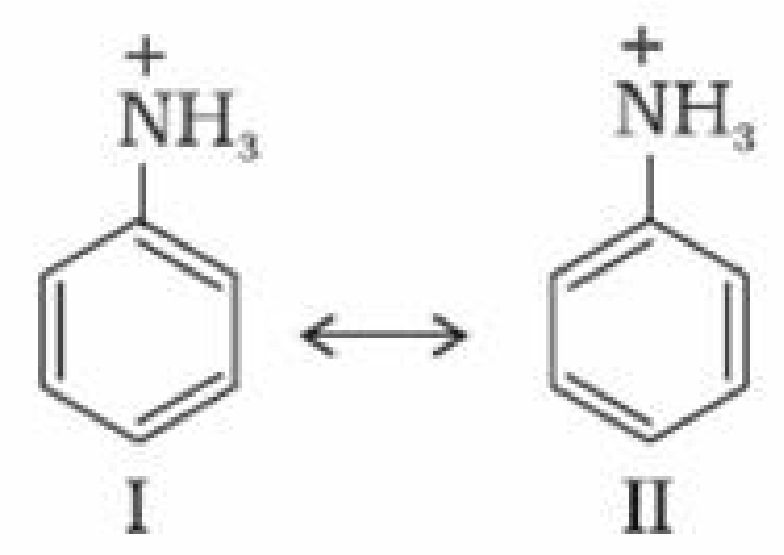 Thus aniline has less tendency to accept a proton to form anilinium ion. 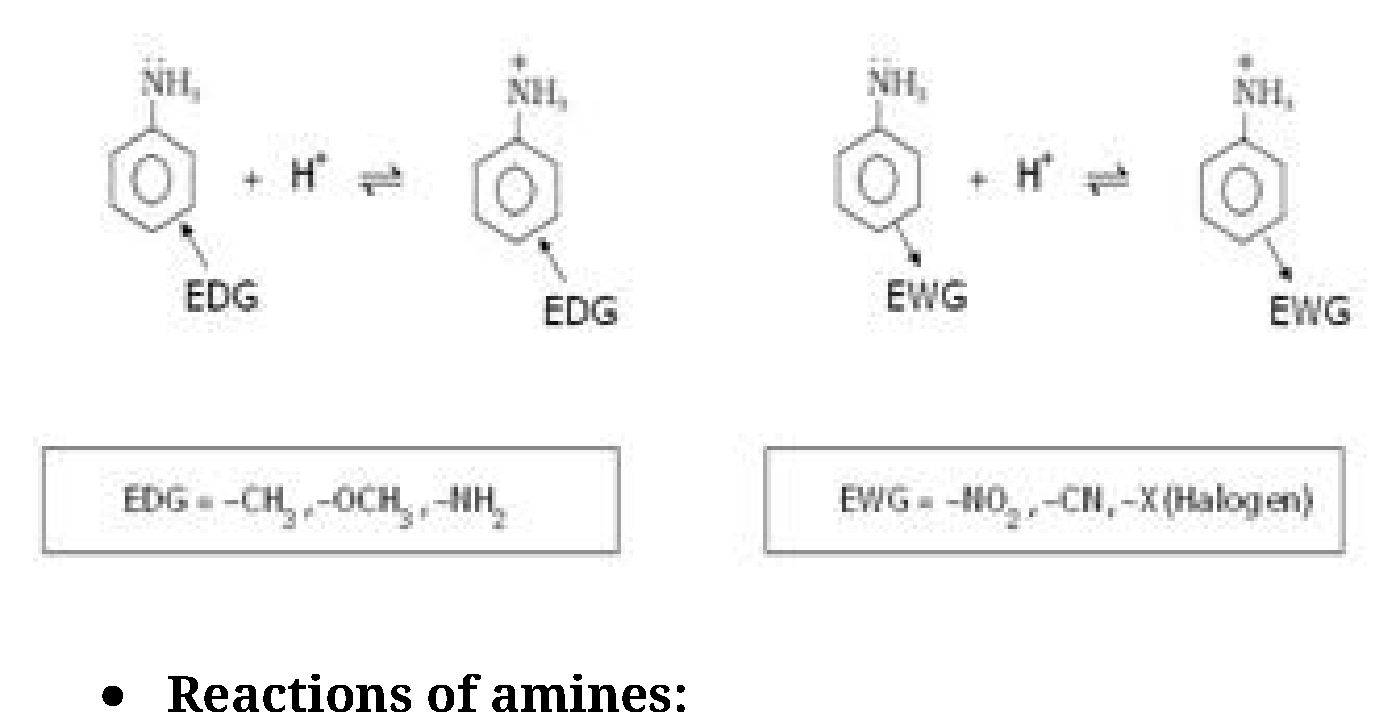 a) Acylation Reaction: Aliphatic and aromatic primary and secondary amines (which
contain replaceable hydrogen atoms) react with acid chlorides, anhydrides and esters to
form substituted amide. Process of introducing an acyl group (R-CO-) into the molecule is
called acylation. The reaction is carried out in the presence of a stronger base than the
amine, like pyridine, which removes HCl formed and shifts the equilibrium to the product
side.

Since tertiary amine do not contain replaceable hydrogen atom they do not undergo
acylation reaction.

b) Carbylamine reaction: Only aliphatic and aromatic primary amines on heating with
chloroform and ethanolic potassium hydroxide form isocyanides or carbylamines.

Secondary and tertiary amines do not give the above test. 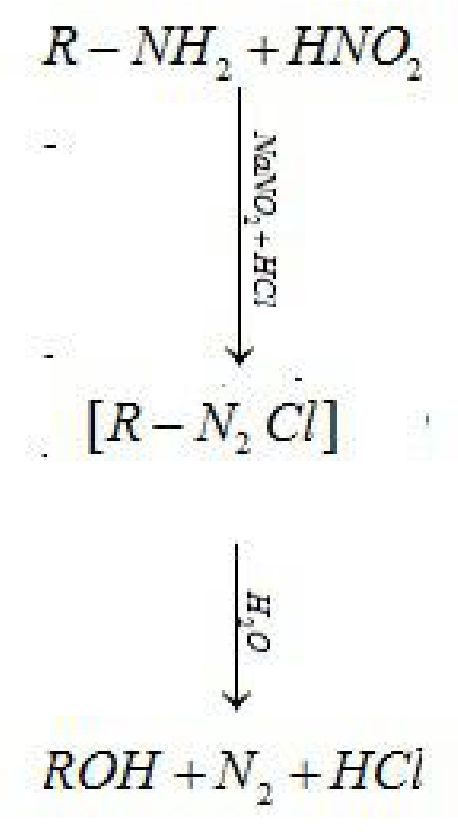 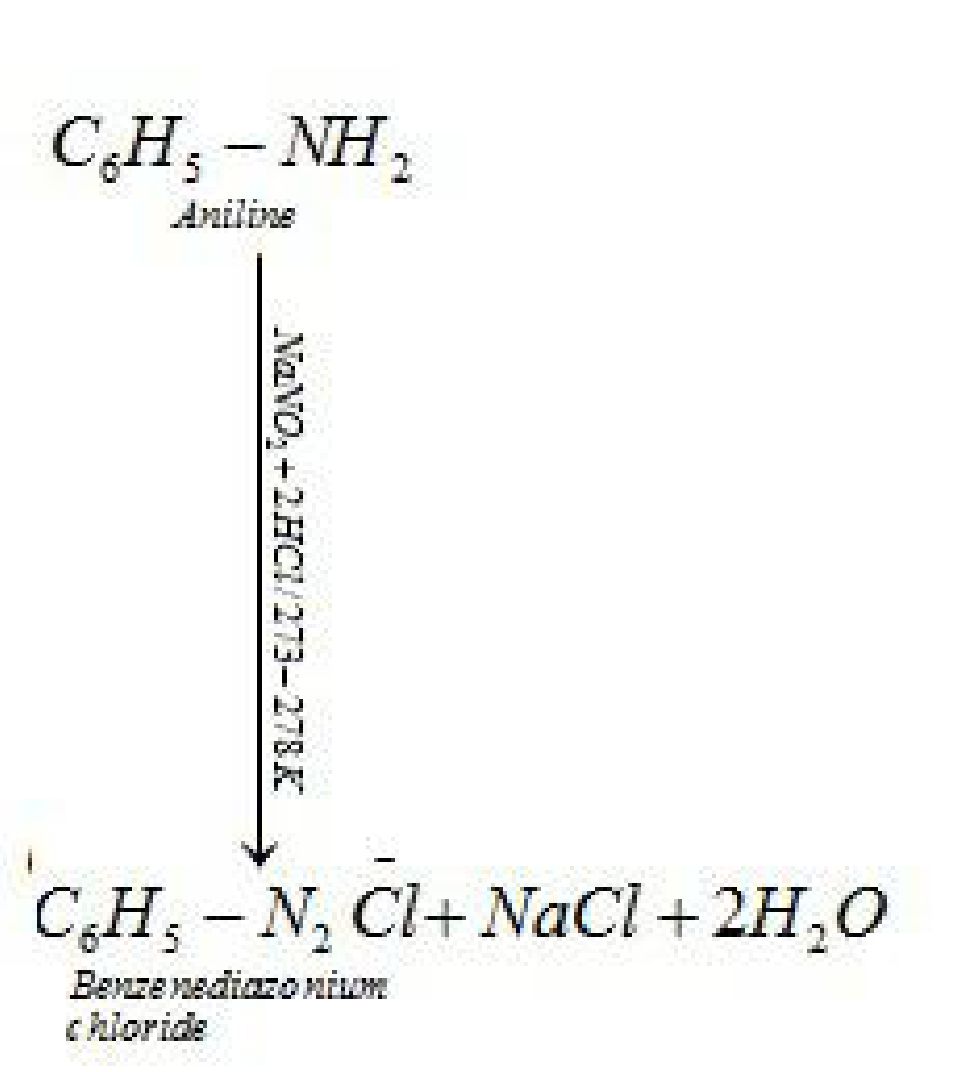 The hydrogen attached to nitrogen in sulphonamide formed by primary amine is strongly
acidic due to the presence of strong electron withdrawing sulphonyl group. Hence, it is
soluble in alkali.

Since sulphonamide formed by secondary amine does not contain any hydrogen atom
attached to nitrogen atom, so it is not acidic. Hence it is insoluble in alkali.

(i) Bromination: Aniline reacts with bromine water at room temperature to give a white
precipitate of 2, 4, 6-tribromoaniline

In order to stop reaction at monosubstitution activating effect of -NH2 group is reduced by
acetylation. This prevents di and tri substituted products. Acetyl group is removed by
hydrolysis.

(a) Under strongly acidic medium aniline gets protonated to form anilinium ion, which is
deactivating group and is meta directing. Hence minitroaniline is also formed in 47% along
with ortho and para products.

(b) Nitration by protecting the -NH2 group by acetylation reaction with acetic anhydride:

on heating with sulphuric acid at 453-473K produces p-aminobenzenesulphonic acid,
commonly known as sulphanilic acid, as the major product.

a) Reactions involving displacement of nitrogen: 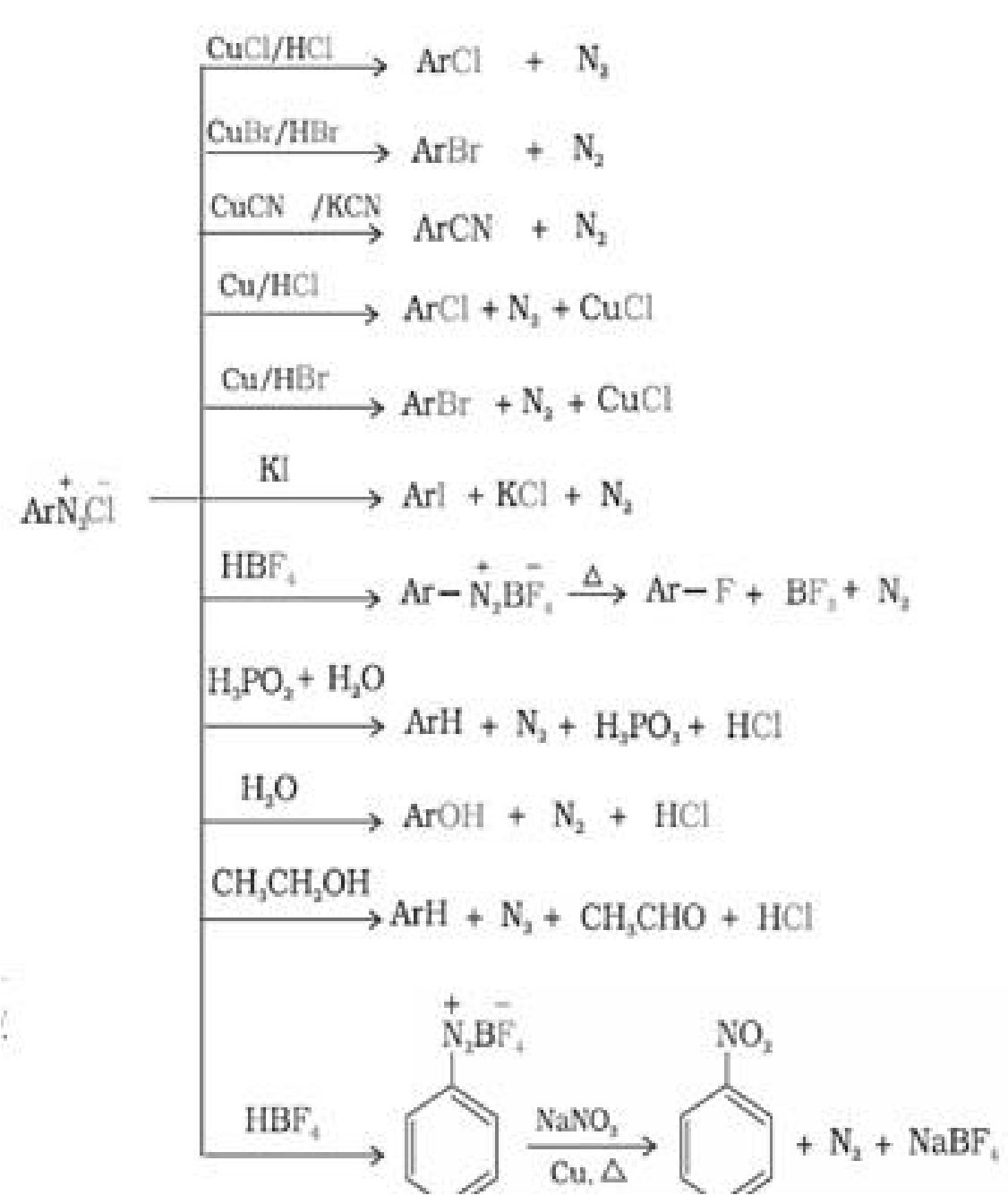 b) Reactions involving retention of diazo group, coupling reactions: Diazonium ion
acts as an electrophile because there is a positive charge on terminal nitrogen.
Therefore benzene diazonium chloride couples with electron rich compounds like
phenol and aniline to give azo compounds. Azo compounds contain -N=N- bond and
reaction is coupling reaction.