According to Section 5 of the Negotiable Instruments Act, 1881, a bill of exchange is defined as an instrument in writing containing an unconditional order, signed by the maker directing a certain person to pay a certain sum of money only to or to the order of a certain person or to the bearer of the instrument.

A bill of exchange is generally drawn by the creditor upon his debtor, It has to be accepted by the drawee (debtor) or someone on his behalf.

Features of a Bill of Exchange

There are three parties to a bill of exchange:

Advantages of a Bill of Exchange

Types of a Bill of Exchange

There are two types of a bill of exchange:

According to Section 4, of the Negotiable Instruments Act, 1861, a promissory note is defined as an instrument in writing (not being a bank note or a currency note), containing an unconditional undertaking signed by the make, to pay a certain sum of money only to or to the instrument. A promissory note does not require any acceptance because the maker of the promissory note himself promises to make the payment.

Features of a Promissory Note

Parties to a Promissory Note

There are two parties to a promissory note:

Following are the important terms related to accounting of bills of exchange:

A Promissory note or bill of exchange is a time instrument when it is expressed to be a payable after specified period, on a specific day, after sight, on the happening of event which is certain to happen.

Calculation of Due Date of a Bill

The calculation of due date of a bill in various cases is calculated as follows:

Calculation of the Date of Maturity in Case of Time Bills

To arrive at the date of maturity in case of time bills, three days of grace are added to the due date. This can be better explained with the help of examples given below.

Accounting Treatment of Bills of Exchange and Promissory Note

When the drawer retains the bill with him till the date of its maturity, the drawer receives the money from the drawee on the maturity date.

2. When the bill is sent to bank for collection

Sometimes, the bill is sent to the bank with instruction that the bill should be retained till maturity and realized on its due date, i.e. the bank should keep the bill till maturity and collect is amount from the acceptor on that date, it is known as ‘bill sent for collection’. The bank credits the net proceed to the customer’s account, after charging for the service. The balance in the bills sent for collection account is shown in the balance sheet as an asset.

In case, a holder of the bill is in need of money, he may discount it through the bank, to obtain cash, i.e. the holder of the bill takes amount from a bank against the bill before the due date. This process is known as discounting of the bill. The bank charges an amount for this purpose and it is termed as ‘discounting charges’.

The charges depend upon the rate of interest and the period of maturity. It is be noted, discounting charges are calculated on the remaining period of the bill, i.e. from the date of discounting till the due date. The bank gets the amount from the drawee on the due date.

2. When the bill is endorsed or negotiated in favour of a creditor

Transfer of a bill of exchange or promissory note to another person is referred to as endorsement negotiation. The person receiving it becomes entitled to receive the payment. The bill can be internal endorsed by the drawer by putting his signature at the back of the bill along with the name of the panty,

Whom it is being transferred. The act of signing and transferring the bill is called endorsement.

Dishonour of a bill

When the drawee or acceptor of the bill fails or is unable to make the payment on the date of maturity, a bill is said to have been dishonored. The holder of the bill may present the bill through a notary public. A bill get the dishonor of the bill noted. Noting authenticated the fact of dishonour , for providing this services fess is charged by notary public which is called nothing charges.

The entries recorded for noting charges in the drawer’s book as follows:

In the Books of Drawer

Journal Entries on Dishonour of Bill

In the Books of Drawer 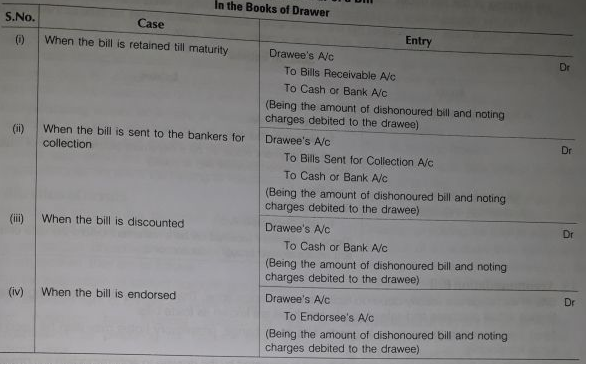 In the books of drawee

When the acceptor of the bill is difficult to meet the obligation of the bill on maturity he may request the drawer for extension of time for payment (i.e. to substitute the old bill when a new bill), if the drawer agrees the old bill cancelled and the fresh bill with new terms of payment is drawn and duty accepted and delivered. This is termed as renewal of bill.

The noting of the bill is not required as the cancellation is mutually agreed. However, the drawer may charges interest from the drawee for the extended period of credit.

Apart from financing transactions in goods, bills of exchange, promissory notes may also be used for raised funds temporarily.

When the accommodation parties agree to raise the funds through an accommodation bill for mutual benefits. It can be done in any of the following two ways:

In the first case, the discounting charges are shared by drawer and drawee in the ratio in which they share to proceeds. But in the second case, the discount is not shared as each party retains the entire proceeds of the drawn and discounted by him. On maturity, each party meets his acceptance.