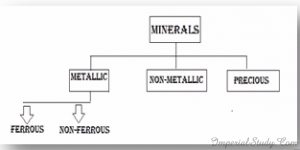 They are homogenous, a naturally occurring substance with a definable internal structure.

Minerals are classified in three categories-:

They are the accumulation of any mineral mixed with other elements.

DISTRIBUTION OF MINERALS RESOURCES IN INDIA

India is deficient in the production of copper. They are malleable, ductile and good conductor used in electrical appliances, electronic and chemical industries. Orissa is the largest producer of Bauxite in India. Balaghat mines in Madhya Pradesh (M.P.) produces 52% copper in India.

Aluminum is obtained from bauxite. It has the strength as iron, light, malleable, good conductor. 45% of bauxite is produced in Orissa.

Energy is required for all the activities i.e. to cook, to provide light and heat, to propel vehicles and to drive machinery. Energy resources are of two types-:

Used for power generation, to supply energy to industry and domestic need.

Note-: Coal is a bulky material which loses weight on use and reduced to ashes. So, thermal power stations are located near coal fields and domestic needs.

IMPORTANCE OF NON-CONVENTIONAL SOURCE OF ENERGY

The largest wind form cluster is located in Tamil Nadu, between Nagercoil and Madurai.

IMPORTANCE OF CONSERVATION OF ENERGY RESOURCES