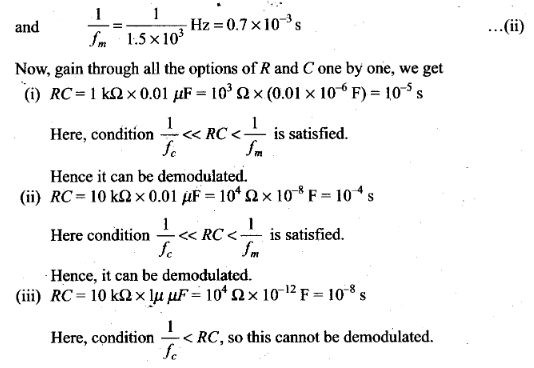 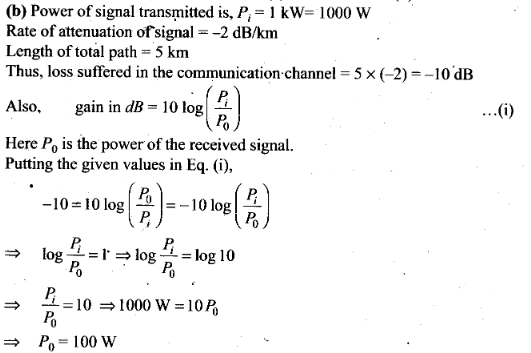 Question 5. A message signal of frequency ωm is superposed on a carrier wave of frequency ωc to get an Amplitude Modulated Wave (AM). The frequency of the AM wave will be

Question 6. I-V Characteristics of 4 devices are shown in figure. 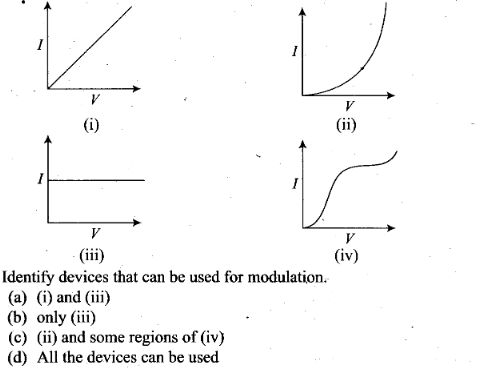 Solution: Key concept: A square law modulator is the device which can produce modulated waves by the application of the message signal and the carrier wave.
Square law modulator is used for modulation purpose. Characteristics shown by (i) and (iii) correspond to linear devices.
And by (ii) corresponds to square law device which shows non-linear relations. Some part of (iv) also follow square law.
Hence, (ii) and (iv) can be used for modulation. 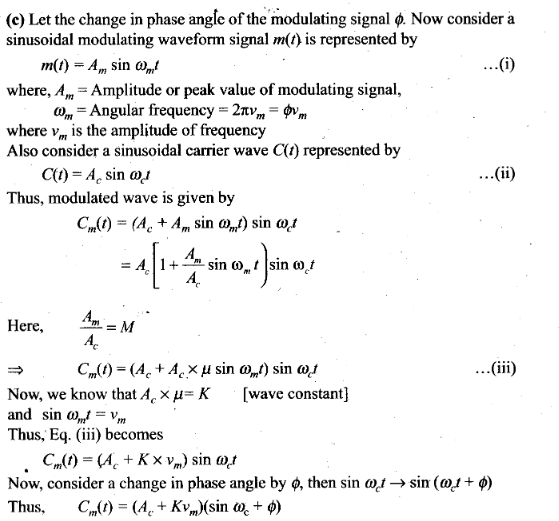 Question 10. An audio signal of 15 kHz frequency cannot be transmitted over long distances without modulation, because
(a) the size of the required antenna would be at least 5 km which is not convenient
(b) the audio signal cannot be transmitted through sky waves
(c) the size of the required antenna would be at least 20 km, which is not convenient
(d) effective power transmitted would be very low, if the size of the antenna is less than 5 km
Solution: (a, b, d)
Key concept: Size of the antenna or aerial. For transmitting a signal, we need an antenna or an aerial. This antenna should have a size comparable to the wavelength of the signal (at least 1/4 in dimension) so that the antenna properly senses the time variation of the signal. For an electromagnetic wave of frequency 20 kHz, the wavelength λ is 15 km. Obviously, such a long antenna is not possible to construct and operate. Hence direct transmission of such baseband signals is not practical. We can obtain transmission with reasonable antenna s if transmission frequency is high (for example,
if n is 1 MHz, then λ is 300 m). Therefore, there is a need of translating the information contained in our original low frequency baseband signal into high or radio frequencies before transmission.
Effective power radiated by an antenna: A theoretical study of radiation from a linear antenna (length l) shows that the power radiated is proportional to (1/λ)2 . This implies that for the same antenna length, the power radiated increases with decreasing λ, i.e., increasing frequency. Hence, the effective power radiated by a long wavelength baseband signal would be small. For a good transmission,we need high powers and hence this also points out to the need of using high frequency transmission. 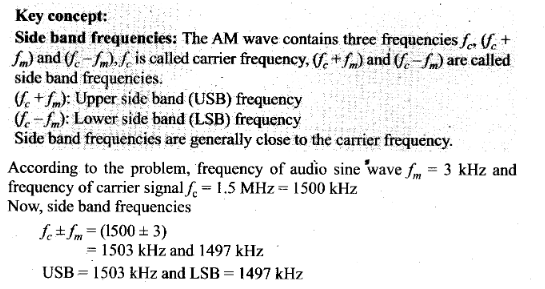 Question 13. The frequency response curve (figure) for the filter circuit used for production of AM wave should be 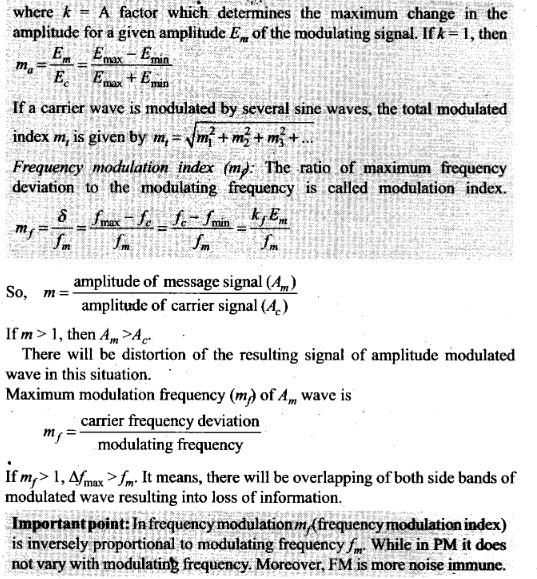 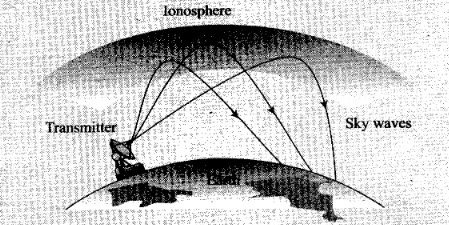 Question 17. Two waves A and B of frequencies 2 MHz and 3 MHz, respectively are beamed in the same direction for communication via sky wave. Which one of these is likely to travel longer distance in the ionosphere before suffering total internal reflection?
Solution: We know that refractive index p of a layer is 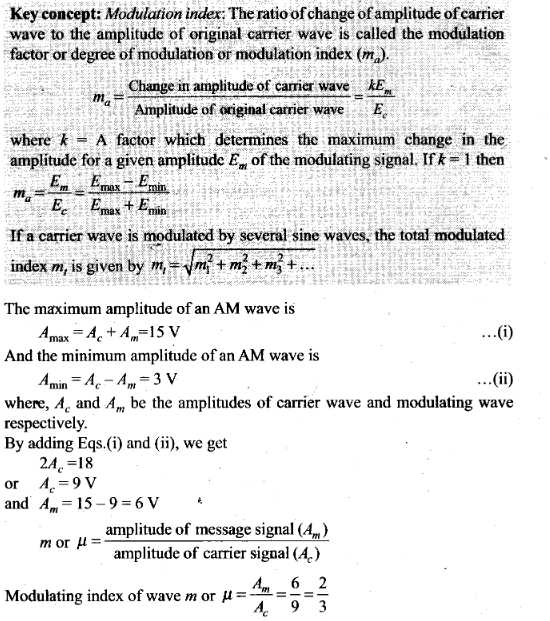 Question 19. Compute the LC product of a tuned amplifier circuit required to generate a carrier wave of 1 MHz for amplitude modulation.
Solution:

Question 20. Why is an AM signal likely to be more noisy than a FM signal upon transmission through a channel?
Solution: An AM signal likely to be more noisy than FM signal through a channel because in case of AM, the instantaneous voltage of carrier waver waves is varied by the modulating wave voltage So, during the transmission, noise signals can also be added and receiver assumes noise a part of the modulating signal. In case of FM, the frequency of carrier waves is changed as the change in the instantaneous voltage of modulating waves. This can be done by mixing and not while the signal transmitting in channel. So, noise does not affect FM signal or simply we can say that noise signals are difficult to filter out in AM reception whereas FM receivers easily filter out noise.
Important point: In frequency modulation mf (frequency modulation index) is inversely proportional to modulating frequency fm. While in PM it does not vary with modulating frequency. Moreover, FM is more noise immune. 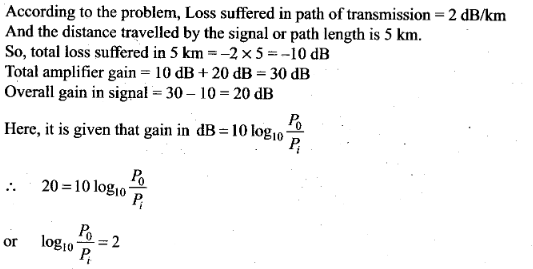 Question 22. A TV transmission tower antenna is at a height of 20 m. How much service area can it cover if the receiving antenna is (i) at ground level, (ii) at a height of 25 m? Calculate the percentage increase in area covered in case (ii) relative to case (i).
Solution: 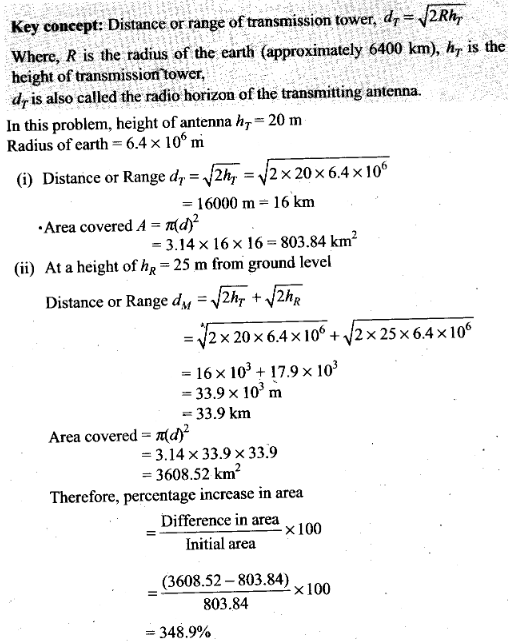 Question 23. If the whole earth is to be connected by LOS communication using space waves (no restriction of antenna size or tower height), what is the minimum number of antennas required? Calculate the tower height of these antennas in terms of earth’s radius.?
Solution:
Key concept: Distance or range of transmission tower, dT =√2RhT
where, R is the radius of the earth (approximately 6400 km). hT is the height of transmission tower, .
dT is also called the radio horizon of the transmitting antenna.
Let us consider the figure given below to solve this problem.
Assume the height of transmitting antenna or receiving antenna in order to cover the entire surface of earth through communication is h1, i.e. hT = hR and radius of earth is R. If dM is the line-of-sight distance between the transmission and receiving antennas, then maximum distance 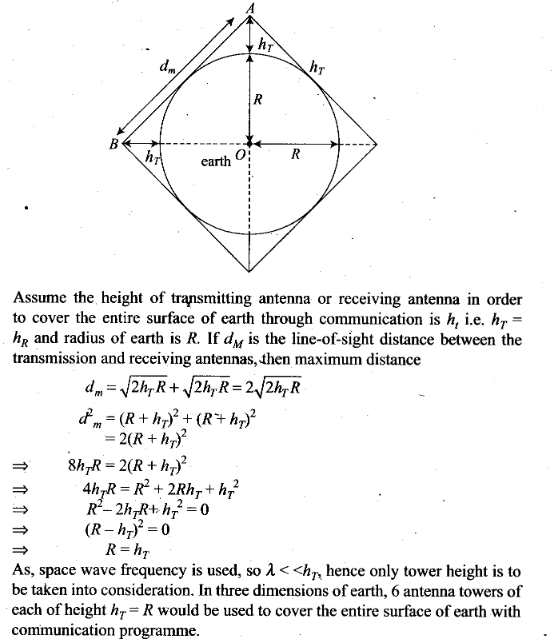 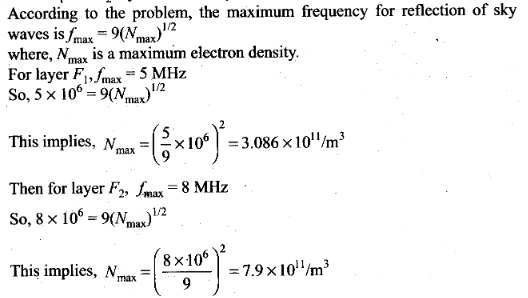 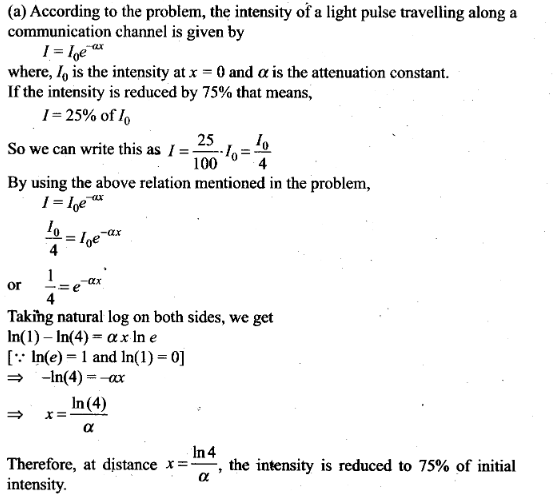 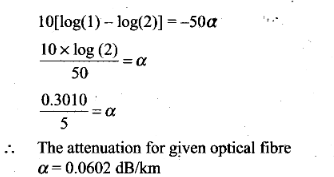 Question 27. A 50 MHz sky wave takes 4.04 ms to reach a receiver via re-transmission from a satellite 600 km above Earth’s surface. Assuming re-transmission time by satellite negligible, find the distance between source and receiver. If communication between the two was to be done by Line of Sight (LOS) method, what should size and placement of receiving and transmitting antenna be?
Solution: Let the receiver is at point A and source is at B. 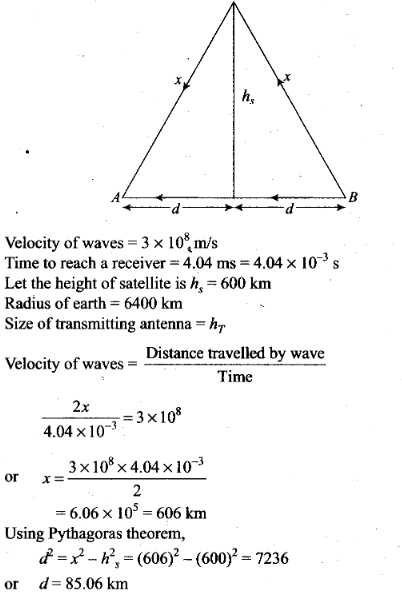 Question 28. An amplitude modulated wave is as shown in figure. Calculate
(i) the percentage modulation,
(ii) peak carrier voltage and
(iii) peak value of information voltage 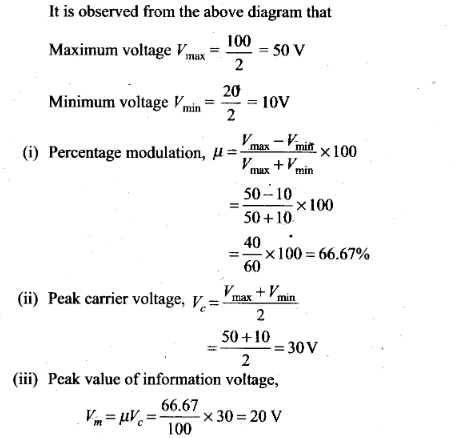 Question 29. (i) Draw the plot of amplitude versus ω for an amplitude modulated wave whose carrier wave (ω > ωc) is carrying two modulating signals, ω1 and ω2 (ω2> ω1).
(ii) Is the plot symmetrical about ωc? Comment especially about plot in region (ω < ωc ).
(iii) Extrapolate and predict the problems one can expect if more waves are to be modulated.
(iv) Suggest solutions to the above problem. In the process can one understand another advantage of modulation in terms of bandwidth?
Solution:

(ii) In the plotted graph shown, we note that frequency spectrum is not symmetrical about ωc. Crowding of spectrum is present for ω < ωc.
(iii) If more modulating signals are present then there will be more crowding in the modulation signal in the region ω <ωc. That will result more chances of mixing of signal.
(iv) To accommodate more signals, we should increase bandwidth and frequency carrier waves ωc. This shows that large carrier frequency
enables to carry more information (i.e., more ωm) and the same will in turn increase bandwidth.