The food procured by the FCI is distributed through fair price shops among the poor.

This is called public distribution system. There was no discrimination between the poor and  non poor under PDS. Under the TPDS, the government has announced separate issue prices   for people below poverty line (BPL) and for above poverty line (APL) families. In December 2000, two special schemes were launched to make the TPDS more focussed and targeted towards the poor. These were Antyodayo Anna Yojana (AAY) and the Annapurna Scheme (APS). The two schemes were linked with   TPDS.

Under the AAY, poor families were identified by the respective state rural development boards. Twenty-five kilograms of foodgrains were made available to each eligible family at highly subsidised rate of Rs 2 per kg for wheat and Rs 3 per kg for rice. This quantity has been raised from 25 to 35 kg with effect from April    2002.

Discuss the role of government in the stabilisation of food grain prices. Ans. Government’s Measures to Stabilise foodgrain    prices.

Our government has adopted the following measures to stabilise food grain prices.

Explain briefly the measures undertaken by the government to increase the production and supply of  foodgrains.

Ans. Government’s measures to increase the production and supply of foodgrains

Main steps undertaken by the government in this regard are as follows :

Explain the paradox of excess stocks of food grains and starvation. Ans. Paradox of Excess Stocks and    Starvation.

India has experienced a paradoxical situation in recent years. While the granaries of the government are overflowing with excess foodgrain stock, we also find people without food. We, in India, find widespread hunger even when we have excess stock of foodgrains. The main reason for this unfortunate situation is that many poor families do not have enough purchasing power (i.e. money income) to buy food. Over one-fifth of the country’s population suffers from chronic hunger. They have to go to their beds with empty stomach. A good food security network, therefore, should not only ensure adequate physical availability of food but also increase the capabilities of the poor to buy food.

To tackle this unfortunate situation, our government has launched several special poverty alleviation programmes. These programmes aim at increasing income of the poor so as to enable them to buy  food.

The major flaws/drawbacks of food security system in India are as follows :

Any family with a ration card can buy a stipulated amount of these items (e.g. 35 kg of grains,  5 litres of kerosene, 5 kgs of sugar etc.) every month from the ration shop. PDS keeps on revising the prices in favour of urban    poors.

What are the problems of the functioning of the ration shops? Describe any four of them.

Ans. The problems of the functioning of the ration shops are :-

Describe in four points your awareness about National Food for Work Programme.

Ans. (i) National Food for Work Programme was launched on November 14, 2004 in 150 most backward districts of the  country.

Explain how Green Revolution helped India to be self-sufficient in food grain production. 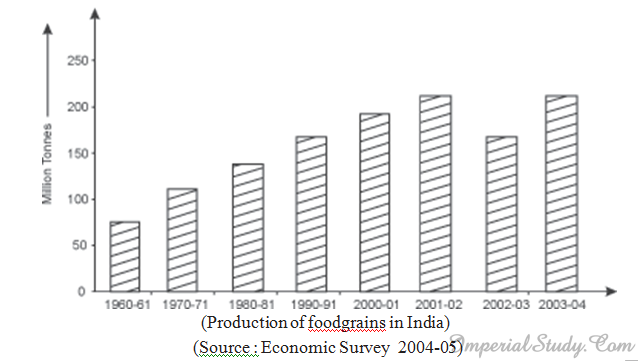 Write a note on the role of cooperatives in providing food and related items.

Ans. The cooperatives also play an important role in food security in India, especially in southern and western parts of the   country.