Q.1. What are the main features of poverty in India?
Ans. Features of Poverty in India :Following are the main features of poverty in India.
(1)Declining Trend : The proportion of people below poverty line in India had variations.
Poverty ratio increased during the decade of the 1970s. It decreased sharply during the
decade of the 1980s. During the decade of 1990s, there was first a rise following the
period of economic reforms and then a fall in the incidence of poverty. Since 1993-94, the
total number of the poor shows a declining trend.
(2)Inter-State Variations : Poverty is not equally distributed through the country. A recent
study shows that more than 90 per cent of India’s rural poor live in the states of Andhra
Pradesh, Orissa, Bihar, Madhya Pradesh, Karnataka, Maharashtra, Rajasthan, Tamil Nadu,
Uttar Pradesh and West Bengal. Further, 50 per cent of India’s rural poor live in three
states (namely, Bihar, Madhya Pradesh and Uttar Pradesh). As against this, the poverty ratio
in the states of Jammu and Kashmir, Gujarat, Kerala, Punjab and Haryana is quite low.
(3)Nature of Poverty : Poverty is visible both in our rural and urban areas. The rural poor
consist of people of low castes and tribal groups. The major group of the poor include
landless agricultural labourers, small and marginal farmers, rural artisans, etc.
In the urban sector, the poor include largely unemployed, underemployed or persons employed
in low productivity occupations such as rickshawpullers, cobblers, street vendors.
Q.2. Describe in brief the important poverty alleviation programmes undertaken by the
Government of India.
Ans. Poverty Alleviation Programmes of India :The important poverty alleviation programmes
which are in operation in rural and urban areas are :
(1)Prime Minister Rojgar Yojana (PMRY) : PMRY was launched on 2 October 1993. The
aim of this programme is to create self-employment opportunities for educated youth in
rural areas and small towns. They are helped in setting up small business and industries.
(2)Swarna Jayanti Gram Swarojgar Yojana (SGSY) : SGSY was launched on 1 April,
1999. It aims at promoting enterprises at the village level. It helps the rural people to
organise themselves into self-help groups. The objective of SGSY is to bring the existing
poor families above the poverty line by providing them income generation assets through
a mix of bank credit and government subsidy.
(3)Pradhan Mantri Gramodaya Yojana (PMGY) : PMGY was introduced in 2000. Its
objective is to focus on village level development in five critical areas, that is, primary
health, primary education, rural shelter, rural drinking water and rural roads. As a result
of this, the quality of life of rural people will improve.
(4)Sampoorna Grameen Rojgar Yojana (SGRY) : This programme was launched in
September 2001. The objectives of this scheme are :

(a) to provide wage employment along with food security in the rural areas.
(b) to create durable community, social and economic assets.
The ongoing Employment Assurance Scheme and JGSY would be merged with SGRY.
(5)National Rural Employment Guarantee Act (NREGA) : NREGA was passed in
September 2005. The Act provides for 100-days assured employment to every rural
household in 200 districts. Later, the scheme will be extended to 600 districts.
However, the results of these programmes have not been very effective. One of the major
reasons for their less effectiveness is the lack of proper implementation and right targeting.
Also, there has been overlapping of schemes. Therefore, the major emphasis in recent years
is on their proper monitoring.
Q.3. What is meant by ‘vulnerability’ to poverty? Which economic categories are more
vulnerable to poverty in India? [CBSE 2010]
Ans. Vulnerability to poverty :It is a measure which describes the greater probability of certain
communities or individuals (such as widow or a physically handicapped person) of becoming
or remaining poor in coming years.
z Economic categories more vulnerable to poverty in India : Schedule tribes, urban
casual labourers, rural agriculture labourers, scheduled castes are major economic groups,
which are more vulnerable to poverty. Among these, scheduled tribes contribute to 51%
of poverty in India which average Indian poverty ratio is 26.
Graph 3.1 : Poverty in India 2000 : Most Vulnerable Groups.

Source : Reports on Employment and Unemployment among Social Groups in India No.
469,472, NSSO, Ministry of Statistics, Programme Implementation, Govt. of India.

Q.5. How can poverty be reduced in future in India? Suggest any four points. [2011 (T-2)]
Ans.Poverty can be reduced in the following ways:-
(i) Increasing empowerment of women and the economically weaker sections of society.
(ii) Fostering the economic growth.
(iii) Increasing the stress on universal free elementary education.
(iv) Caste and gender discrimination to be avoided.
(v) Improving health care, education and job security.
(vi) Removing unequality of wealth among people.
Q.6. Mention the two planks on which the current anti-poverty strategy of the government is
based. Why were the poverty alleviation programmes not successful in most parts of
India? [2011 (T-2)]
Ans.The current anti-poverty strategy of the government is based broadly on two planks:
(i) Promotion of economic growth.
(ii) Targeted anti-poverty programmes.
The results of poverty alleviation programmes have been mixed. The major reasons for less
effectiveness are :-
(i) Lack of proper implementation and right targeting.
(ii) Overlapping of a number of schemes.
They lack proper monitoring and therefore the benefits of these schemes do not fully reach out
to the deserving poor.

[2011 (T-2)]
Ans.Social exclusion can be seen in the terms of poors who have to live only in a poor surrounding
with other poor people. Poor people are excluded from better surroundings with better-off
people. For example, in India people belonging to certain lower castes (i.e., Scheduled Castes)
are excluded from equal opportunities. Poor people of certain castes have to live in a separate
locality and are excluded from mixing with better-off people. Due to such discrimination These
people are deprived of better employment and growth opportunities. Social exclusion thus lead
to poverty and can cause more damage than having a very low income.
Q.9. Who are the most vulnerable as far as poverty is concerned? How have the states of West
Bengal, Punjab and Tamil Nadu tackled poverty? [2011 (T-2)]
Ans. The most vulnerable groups to poverty are :
(i) Scheduled Castes and Scheduled Tribes
(ii) Rural agricultural labour
(iii) Urban casual labour 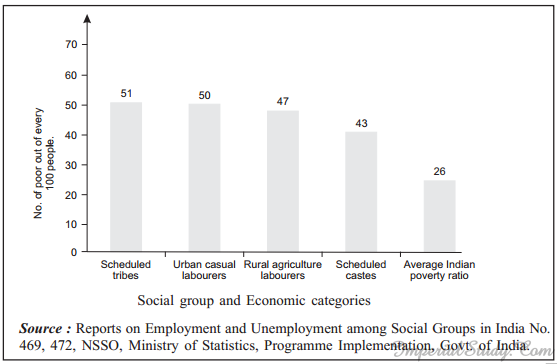