Class 6 Social Science (Geography) Chapter 6 Major Landforms of the Earth NCERT Solution is given below.

Answer:
(a) The major landforms are: mountains, plateaus and plains.
(b)

(c) The different types of mountains are: fold, block and volcanic.
(d)
Usefulness of Mountains
Mountains are a storehouse of water. Many rivers have their source in the glaciers. Reservoirs are made to harness this water for consumption, irrigation and generating electricity.
River valleys and terraces are ideal for cultivation of crops.
Mountains have a rich variety of flora and fauna. Mountains provide an idyllic site for tourists.
(e) Most of the plains are formed by rivers and their tributaries. The rivers flow down the slopes of mountains and erode them. They carry forward the eroded material. Then they deposit their load (consisting of stones, sand and silt) along their courses and in their valleys. It is from these deposits that plains are formed.
(f) A lot of flat lands are available in plains. Also, the available land is generally fertile. Hence, plains are the most useful areas for human habitation as well as for cultivation. Transport network can also be easily constructed in plains. Thus, plains are very thickly populated regions of the world.
(g) Mountains have very harsh cold climate. The slopes of the mountains are very steep. Also, mountains offer very little land for farming. For these reasons, mountains are thinly populated.

Question 2:
Tick the correct answers.
(a) The mountains differ from the hills in terms of 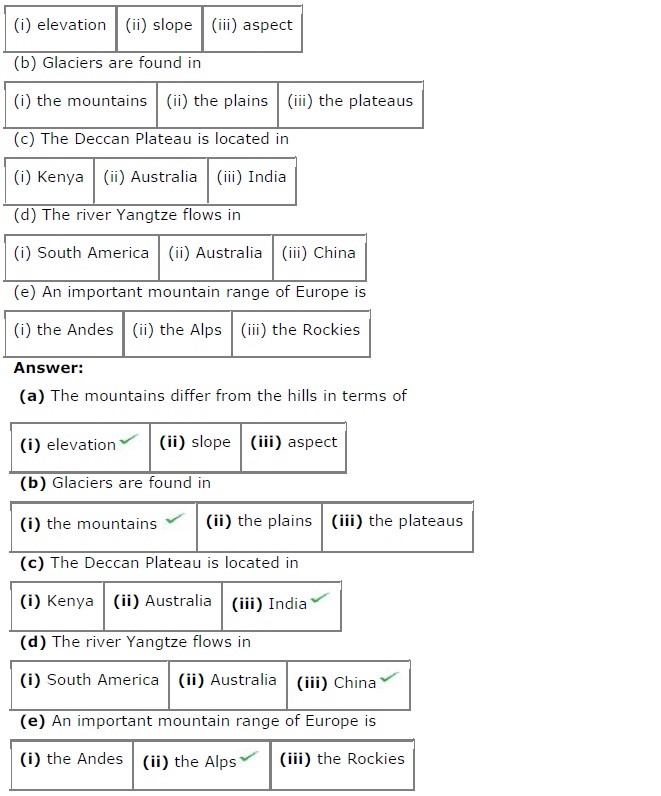