NCERT Textbook Page 15
Question 1. What is meant by a substance?
Answer: A pure substance consists of a single type of particles.

Question 2. List the points of differences between homogeneous and heterogeneous mixtures.
Answer:

Question 2. How are sol, solution and suspension different from each other?
Answer:

Question 3. What type of mixtures are separated by the technique of crystallisation?
Answer: Crystallisation technique is used to purify solid with some impurities in it. Example: Salt from sea-water.

Question 1. Which separation techniques will you apply for the separation of the following?
(a) Sodium chloride from its solution in water.
(b) Ammonium chloride from a mixture containing sodium chloride and ammonium chloride.
(c) Small pieces of metal in the engine oil of a car.
(d) Different pigments from an extract of flower petals.
(e) Butter from curd.
(f) Oil from water.
(g) Tea leaves from tea.
(h) Iron pins from sand.
(i) Wheat grains from husk.
(j) Fine mud particles suspended in water.
Answer: (a) Evaporation
(b) Sublimation
(c) Filtration
(d) Chromatography
(e) Centrifugation
(f) Separating funnel
(g) Filtration
(h) Magnetic separation
(i) Winnowing/ sedimentation
(j) Decantation and filtration

Question 2. Write the steps you would use for making tea. Use the words, solution, solvent, solute, dissolve, soluble, insoluble, filtrate and residue.
Answer: 1. Take a cup of water in a container as solvent and heat it.
2. Add sugar in it which is solute. Heat it till all sugar dissolves.
3. You get a solution of water and sugar.
4. Sugar is soluble in water completely.
5. Add half a tea-spoon of tea-leaves, it is insoluble in water.
6. Boil the content, add milk which is also soluble in water, boil again.
7. Filter the tea with the help of strainer, the tea collected in cup is filtrate and the tea leaves collected on the strainer is residue.

Question 3. Pragya tested the solubility of three different substances at different temperatures and collected, the data as given below (results are given in the following table, as grams of substance dissolved in 100 grams of water to form a saturated solution).

Question 4. Explain the following giving examples:
(a) Saturated solution
(b) Pure substance
(c) Colloid
(d) Suspension
Answer: (a) Saturated solution: In a given solvent when no more solute can dissolve further at a given temperature is called saturated solution.
(b) Pure substance: A pure substance consists of a single type of particles. E.g., gold, silver.
(c) Colloid: A colloid is a solution in which the size of solute particles are bigger than that of true solution. These particles cannot be seen with our naked eyes, they are stable, e.g., ink, blood.
(d) Suspension: It is a heterogeneous mixture in which the solute particles are big enough to settle down, e.g., chalk-water, paints, etc.

I. Multiple Choice Questions
Choose the correct option:
1. Fog, clouds are an example of
(a) aerosol (b) colloid
(c) suspension (d) emulsion
2. Sponge can be compressed, it is a
(a) solid (b) liquid
(c) gas (d) foam
3. An impure sample of potash alum can be purified by
(a) evaporation (b) crystallisation
(c) centrifugation (d) filtration
4. Chalk dissolved in water is an example of
(a) true solution (b) colloid
(c) suspension (d) saturated solution
5. 50 gm sugar is dissolved in a glass of water at 30°C. On heating this solution it will
(a) crystallise (b) evaporate
(4 become unsaturated (d) sugar will char
6. Which of the following shows tyndall effects?
(a) salt solution (b) sugar solution
(c) starch solution (d) copper sulphate solution
7. Pick up the odd one out.
(a) brass ‘ (b) air
(c) sand (d) graphite
8. Which of the following is liquid-liquid solution?
(a) face-cream (b) emulsion
(c) milk (d) all of these
9. To separate two miscible liquids by fractional distillation, it should have one of the following condition
(a) should be miscible (b) should be immiscible
(c) difference in the boiling point should be less than 25 K
(d) none of these
10. To obtain toned and double toned milk from full-cream milk we can
(a) filtrate it (b) sediment it
(c) distillate it – (d) centrifuge it
11. The separation technique which involves the difference in their densities is
(a) sublimation (b) separation by separating funnel
(c) centrifugation (d) both (b) and (c)
Answer: 1—(a). 2—(a), 3—(b), 4—(c), 5—(c), 6—(c), 7—(d), 8—(d), 9—(c), 10—(d), 11-(d).

II. Very Short Answer Type Questions
Question 1. Define solvent.
Answer: The component of the solution that dissolves the other component in it is called the solvent.

Question 2. Define solute.
Answer: The component of the solution that is dissolved in the solvent is called solute.

Question 4. What are alloys?
Answer: The homogeneous mixture of two or more metals or a metal and non-metal is called an alloy. E.g., steel is an alloy of iron and carbon.

Question 5. Give one example of gas in liquid solution.
Answer: Cold-drinks, carbon dioxide gas as solute is mixed with water as a solvent.

Question 9. What is “solubility” of a solute?
Answer: The amount of the solute present in the saturated solution at the given temperature is called its solubility.

Question 13. Why water is called universal solvent?
Answer: Water can dissolve large number of substances in it.

Question 16. What is emulsion?
Answer: When both the dispersed phase and dispersing medium is liquid, it is called emulsion. E.g., milk, face cream.

Question 17. What is aerosol?
Answer. When the solid or liquid is dispersed in a gas it is called aerosol. E.g., smoke, fog.

Question 19. What is chromatography?
Answer: Chromatography is the technique used for separation of those solutes that dissolve in the same solvent.

Question 20. What is distillation?
Answer: Distillation is the separation technique of two miscible liquids that boils without decomposition and have sufficient difference in their boiling points.

Question 22. What is condenser?
Answer: It is an apparatus used to convert gas into liquid by cooling it.

III. Short Answer Type Questions
Question 1. Why is mixture called impure substance?
Answer: Mixture consists of different components which retain their properties and can be easily separated by physical processes, hence it is called as impure substance.

Question 2. Give the differences between mixture and compound.
Answer:

Question 3. Distinguish between a physical change and chemical change.
Answer:

Question 6. What is a colloidal solution?
Answer: It is a heterogeneous solution which appears to be homogeneous, particles size is very small and so cannot be seen with naked eyes but it is stable. E.g., milk and blood.

Question 12. A student is given a mixture of naphthalene ball’s powder and common salt. He need to separate this mixture. How will he do this?
Answer: The properties of both naphthalene and common salt should be known, before we choose the separation technique.
Naphthalene is a sublimate which on heating changes to gaseous state directly. Hence to separate a volatile compound (sublimate) from a non-volatile compound (non-sublimate), the sublimation process is used. 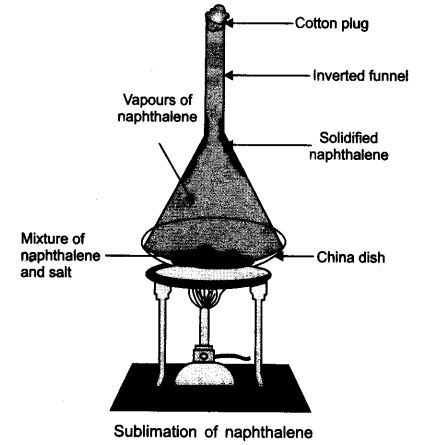 In a China dish the mixture is kept, and is placed on a stand. An inverted funnel is kept over the mixture in China dish with plugged stem. The sublimate on heating gets collected on the funnel and common salt remains in the China dish.

Question 13. How can we obtain different gases from air?
Answer: Air is a homogeneous mixture and its components can be separated by fractional distillation. 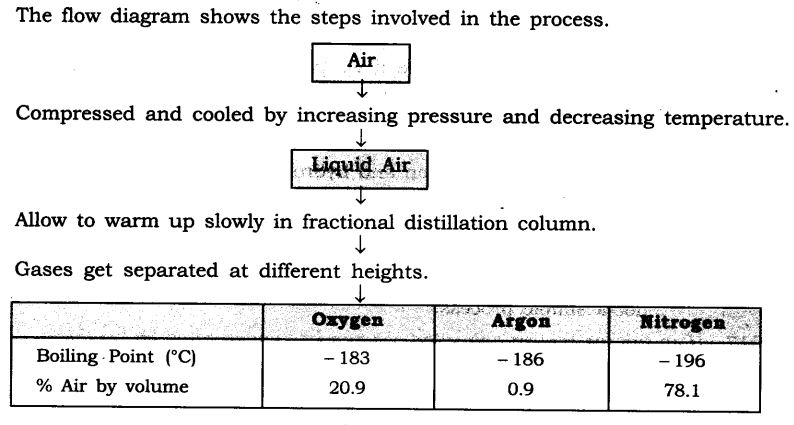 In filtration tank water passes through different layers of sand and gravel as shown in the above figure this is for adsorption of impurities.
The clear water reaches a chlorinated tank where water is mixed with bleaching powder/chlorine to kill bacteria and then supplied to houses.

Question 19. If 20g of salt is present is 220 g of solution, calculate the concentration of solution:

Question 2. State the different types of colloids with examples.
Answer: Different colloids are formed due to different dispersed phase and dispersing

V. Value-Based Questions
Question 1. Anil’s sister acddentally added some water into the bottle containing olive oil and she was afraid of the scolding. Anil helped his sister and separated the water from olive oil using bottle as separating funnel.
(a) What is the principle of using and working of separating funnel?
(b) Suggest two separation techniques used to separate liquid mixtures.
(c) What value of Anil is seen in the above case?
Answer: (a) The principle of separating funnel is difference in the densities of two liquids.
(b) Liquid mixtures can be separated by distillation and fractional distillation.
(c) Anil showed the value of helping, caring and responsible behaviour.

Question 2. Preeti saw a labour entering into the sewage manhole immediately after removing the lid. She promptly stopped the labour from entering into the manhole and told him to wait for some time before he enters into it.
(a) What will happen if the labour immediately enters into the manhole for cleaning) after removing the lid?
(b) Name main gases that are released from the manhole.
(c) What value of Preeti is seen in the above act?
Answer: (a) If the labour immediately enters the manhole on removing its lid he would die due to suffocation and inhalation of poisonous gases which are compressed and released by sewage.
(b) Gases released from the sewage manhole are methane, carbon dioxide and hydrogen sulphide.
(c) Preeti shows the value of moral responsible behaviour and aware citizen.

Question 3. Prasanna wanted to buy a deodorant from the shop. While buying a bottle he felt that it was slightly heavier than usual deodorant bottle that he purchased everytime. He read the weight mentioned on the bottle and told the shopkeeper to weigh the same. He found the bottle was heavy and on opening the deodorant bottle he found it half-filled with water. He complained the matter to the consumer authority.
(a) Define density.
(b) Apart from water what is the other substance that some shopkeepers add into the deodorant.
(c) What value of Prasanna is reflected in this act?
Answer: (a) Density of any substance is defined to be the mass of the substance per unit volume.
(b) One can add some cheap gases or compressed air in the deodorant bottles.
(c) Prasanna showed the value of being having leadership quality, rightful, aware and responsible citizen.

Question 4. Rita’s father always got his vehicle checked for pollution control. He got it tested for the aerosol if released by his car. He also uses unleaded petrol and makes use of public transport wherever possible. He sparingly use his car.
(a) What is aerosol?
(b) What happens when smoke released from vehicle mixes with fog?
(c) What are the values of Rita’s father is reflected here?
Answer: (a) When the solid or liquid is dispersed in a gas it is called aerosol e.g. smoke.
(b) When smoke mixes with fog it forms smog.
(c) Rita’s father is an aware citizen, environmentally concerned and dutiful.