(a)   Why is agriculture a seasonal   activity?

Ans. (a)  Agriculture is a seasonal occupation because farmars remain out of work for 4 to 5 months in  a year.

(a)   Does Ahmed have a regular income from   rickshaw-pulling?

(b) How does the yellow card help Ahmed run his family even with small earnings from rickshaw-pulling?

Ans.  (a)   No, Ahmed’s earning from rickshaw-pulling fluctuates every   day.

(b)  With his yellow card, Ahmed gets sufficient quantity of wheat, rice, sugar and kerosene  oil for his daily requirements. He gets these essential items at half of the market price.      In this way, Ahmed is able to manage his family even with small earnings.

Study  the Graph 4.1 and answer the following questions    : 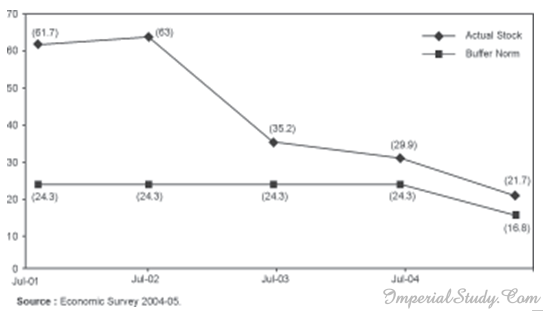 Study  the Graph 4.2 and answer the following questions    :

When is food security ensured   ?

Ans. Food security is ensured under the following conditions :

A section of people in India are still without food. Explain.

Ans. Despite large increase in foodgrain production we find people without food in India. Poor people suffer from chronic hunger. They find themselves unable to buy food. Over one-fifth    of the country’s population still suffers from chronic    hunger.

What happens to the supply of food when there is a disaster or a calamity?

What has our government done to provide food security for the poor? Discuss any two schemes launched by the  government.

Ans. Our government has undertaken a number of measures to provide food security for the poor.

A brief account of these measures is given below :

In 2000, two special schemes were launched. One, Antyodaya Anna Yojana and second, the Annapurna Schemes. The former relate to the poorest of the poor, while the latter targets indigent senior citizens. The functioning of these two schemes was linked with the PDS. Under AAY scheme, thirty-five kilograms of foodgrains are made available to each eligible family at a rate of Rs 2 per kg for wheat and Rs 3 per kg for rice.

Under APS, 10 kilograms of food grains is made available to eligible persons free of cost.

minimum price for their crops. This price is called ‘minimum support price’.

The interests of the consumers are protected when the procured food is made available to the consumers at subsidised rates. This task is done through fair price shops.

With a view to provide incentives to the farmers for raising the production of their crops, the government announces price of some crops before the sowing season. The government remains ready to purchase their crops at these pre-announced prices. This price is called minimum support  price (MSP).

The purchased foodgrains are stored in granaries. This is done to distribute foodgrains among the poorer section of the society. The government makes foodgrains available to  the poor at a price much lower than the market price. This is known as issue price.

The food procured by the government is distributed among the poor. This task is done through government regulated shops which are known as fair price shops.

Write a note on the role of cooperatives in providing food and related items.

Ans. Role of Cooperatives in providing food and related items is as follows:-

The cooperatives are playing an important role in food security in India, especially in the southern and western parts of the country. The cooperative societies set up shops to sell goods to the poor people at lower prices. For example, out of all fair price shops operating in Tamil Nadu, nearly 94 percent are being run by the cooperatives. In Delhi, Mother Dairy is providing milk and vegetables to the consumers at controlled prices which are decided by the Delhi Government. Amul is another example in this regard. It has brought about the White Revolution in the country. There are many more cooperatives and NGOs also working intensively towards this  direction.