Q.1. Looking at the photograph (as given in the textbook) can you explain how a doctor,
a teacher, a engineer and a tailor are an asset to the economy?
Ans.Doctors, teachers, engineers and tailors are assets to the economy because of their existing
skills and abilities.
Q.2. Do you notice any difference between the two friends? What are those?
Ans. Difference between two friends — Sakal and Vilas
(i) Sakal’s parents wanted him to study, while Vilas’s mother cannot afford to send him to
school. Moreover, Vilas was a patient of arthritis.
(ii) Sakal was meritorious and interested in studies, while Vilas wasn’t.
(iii) Sakal completed his vocational course in computer and got a well paid job, while Vilas
was faced to sell fish like his mother.
(iv) Sakal earns a good amount of money, while Vilas earns only a meagre income.
Q.3. Say whether these activities are economic or non-economic activities : Vilas sells fish in
the village market. Vilas cooks food for his family. Sakal works in a private firm. Sakal
looks after his younger brother and sister.
Ans.See S.A.Qs. No. 3.Q.4. (a) Has the literacy rate of the population increased since 1951?
(b) In which year India had the highest literacy rates?
(c) Why literacy rate is high among the males of India?
(d) Why are women less educated than men?
(e) How would you calculate literacy rate in India?
(f) What is your projection about India’s literacy rate in 2010?
Ans.(a) Yes. (b) In 2001.
(c) Males in India are provided better educational opportunities.
(d) Because of sex discrimination, females are not treated at par with males. Females are not
provided equal educational opportunities.
(e)Literacy Rate = Total literate people in the age group of 17 years and above
Total number of people in the age group of 17 years and above
(f) India’s literacy rate may rise to nearly 75 percent.
Table 2.1 : Number of institutions of higher education, enrolment and facility
Year Number of Number of Students Teachers
Colleges Universities
1950–51 750 30 2,63,000 24,000
1990–91 7,345 177 49,25,000 2,72,000
1996–97 9,703 214 67,55,000 3,21,000
1998–99 11,089 238 74,17,000 3,42,000
Q.5. Discuss this table in the classroom and answer the following questions.
1. Is the increase in number of colleges adequate to admit the increasing number of students?
2. Do you think we should have more number of universities?
3. What is the increase noticed among the teachers in the year 1998-99.
4. What is your idea about future colleges and universities?
Ans. 1. Yes. 2. No.
3. The number of teachers in 1998-99 increased by 21,000m when compared with that in
1996–97.
4. The number of colleges and universities in future will increase.
Q.6. Table 2.2 : Health infrastructure over the years.

Study the Table 2.2 and answer the following questions.
1. What is the percentage increase in dispensaries from 1951 to 2001?
2. What is the percentage increase in doctors and nursing personnel from 1951 to 2001?
3. Do you think the increase in the number of doctors and nurses adequate for India?
If not, why?
4. What other facilities would you like to provide in a hospital?
5. Discuss about the hospital you have visited?
6. Can you draw a graph using this table?
Ans.1. 370 per cent
2. 715 per cent increase in case of doctors and 3982 per cent in case of nursing personnel.
3. No, because the number of doctors and nurses per thousand of population is very low
compared to advanced countries.
4. There should be sufficient number of doctors, nurses and beds in a hospital. Besides, a
hospital must be equipped with all modern facilities.
5. I have visited a MCD hospital in Delhi. The hospital had all basic facilities.
Graph showing health infrastructure over the years. 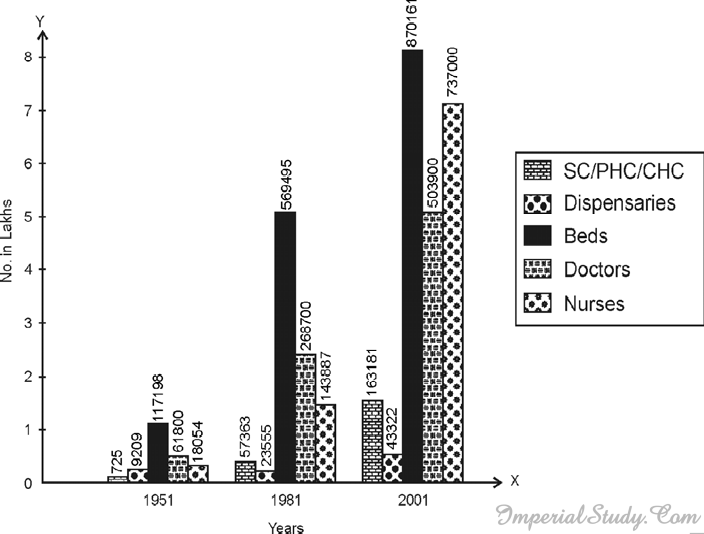 Q.1. What do you understand by ‘people as a resource’?
Ans.People as a resource is a way of referring to the country’s working population in terms of their
existing productive skills and abilities.
Q.2. How is human resource different from other resources like land and physical capital?
Ans.Human resource is different from other resources like land and physical capital. Human
resource refers to human capital which can make use of land and capital. Land and capital
cannot become useful on their own.
Population becomes a human resource when there is investment made in form of education,
training and medical care. On the other hand, land is a natural resource. And physical capital
includes tools, machines, buildings, raw materials, etc. Land and physical capital, therefore, are
tangible.
Q.3. What is the role of education in human capital formation?
Ans.Education is the most important component of human resource development. The role of
education in human capital formation can be judged from the following facts :
(i) Education increases labour productivity.
(ii) Education modifies /improves human behaviour.
(iii) It develops personality and sense of national consciousness among the people which are
important for rapid economc growth.
(iv) It promotes science and technology.
Q.4. What is the role of health in human capital formation?
Ans. Role of Health in Human Capital Formation.
Unhealthy persons become a liability and healthy persons prove an asset for the economy.
Therefore, improvement in the health status of the population is regarded very essential.
Improved health contributes to economic growth in the following ways :
(i) It reduces production loss caused by worker’s illness.
(ii) It increases the efficiency of workers.
(iii) It permits the use of natural and other resources.
(iv) It increases the enrolment of children in schools and makes them better able to learn.
Q.5. What part does health play in an individual’s working life?
Ans. Role of health in an individual’s working life.
Health is a yardstick of one’s well-being. Efficiency of a person largely depends on his health.
If a person falls sick quite often, he will not be able to do his job/work efficiently. Therefore,
his income will be low. Because of low level of income, he will not be able to get proper food
and proper education for his children. This will further reduce his efficiency of work and
thereby income. In fact, good health improves the quality of life.
Q.6. What are the various activities undertaken in the primary sector, secondary sector and
tertiary sector?
Ans. Classification of Economic Activities.
The economic activities of an economy can broadly be classified into three main producing
sectors. These are :
Primary sector. Primary sector produces goods by exploiting natural resources. Therefore, the
activities of this sector include agriculture, forestry, animal husbandry, fishing, poultry and
mining.
Secondary sector. It converts raw materials into finished goods. It includes all manufacturing
and construction activities.
Tertiary sector. This sector includes trade, transport, communication, banking, education,
health, tourism, insurance etc. i.e. all those producing services.
Q.7. What is the difference between economic activities and non-economic activities?
Ans. Difference between Economic and Non-Economic Activities.

Q.8. Why are women employed in low-paid work?
Ans.Women in India are generally employed in low-paid work. This is because of the reason that
most women have meagre education and low skill formation as compared to men. They work
under insecure working conditions. Besides, Indian women prefer to work at nearby places
only. Also, they have to go on frequent maternity leave. All these factors force them to work
at low wages. However, women with higher education and skill formation are paid at par with
men.
Q.9. How will you explain the term unemployment?
Ans.Unemployment is said to exist when people who are willing to work at the current prevailing
wages cannot find work/job. If some one is not interested in doing work at the ongoing wage
rate or outside his/her domestic domain he/she will not be counted as unemployed.
Q.10. What is the difference between disguised unemployment and seasonal unemployment?
Ans. Disguised Unemployment.
When more persons are working in a job than actually required, the situation is termed as
disguised unemployment. For example, if in an agricultural activity eight people are engaged
but this work/activity actually requires the services of five people, then three persons are extra.
If these three people out of eight are withdrawn, total production will remain unaffected.
Seasonal Unemployment.
Seasonal unemployment occurs when people are able to find jobs only during some months of
the year. This kind of unemployment is generally found in the agricultural sector.
Q.11. Why is educated unemployment a peculiar problem of India?
Ans. Problem of Educated unemployment.The joblessness among the educated, i.e. matriculates
and above, is called educated unemployment. Unemployment problem signifies the wastage of
human resources. If unemployment is high among the educated persons the quantum of
wastage of resources will be greater. This is due to investments in education and skill
formation. There is a feeling of hopelessness among the educated youth. India has to spend a
lot of money on education every year. People who should have been assets for the economy
have turned into a liability. In this way educated unemployment is one of the big problems for
India.
Q.12. In which field do you think India can build the maximum employment opportunity?
Ans.India can build the maximum employment opportunity in the agricultural sector. Agriculture
is the most labour absorbing sector of the economy. Multiple cropping may help a lot in this
regard.
Q.13. Can you suggest some measures in the education system to mitigate the problem of the
educated unemployed?
Ans. Measures to Reduce Educated Unemployment.The education system in India is not
employment oriented. There is too much emphasis on general education rather than vocational
education. More employment exchange offices may be opened in the country. Though these
employment exchanges do not directly provide employment, they are of great assistance in
directing the educated job seekers to the possible areas of employment.
Q.14. Can you imagine some village which initially had no job opportunity but later came up
with many?
Ans.There was a village inhabited by several families, Initially the village was self-reliant in the
sense that each family produced all goods to meet the needs of its members. But later, it came
up with many job opportunities. One of the families decided to send one of its sons to an
agriculture college. After completing his education, he became an agro-engineer in the village.
Inspired by this, all the families of the village requested the panchayat to open a school in the
village. The panchayat opened a school with the help of the government and a teacher was
recruited for the school. After some time, one of the families sent its daughter for training in
tailoring. After getting necessary training, she started stitching clothes for the villagers. Thus,
there was another job – that of a tailor in the village. In this way, many jobs were created in
the village.