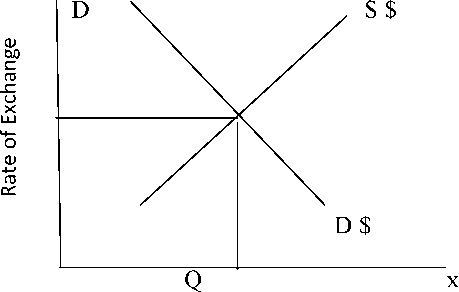 Foreign Exchange refers to all currencies other than the domestic currency of a given country.

Foreign exchange rate is the rate at which currency of one country can be exchanged for currency of another country.

FIXED EXCHANGE RATE SYSTEM: Fixed exchange rate is the rate which is officially fixed by the government, monetary authority and not determined by market forces.

FLEXIBLE EXCHANGE RATE: Flexible exchange rate is the rate which is determined by forces of supply and demand in the foreign exchange market.

DEMAND FOR AND SUPPLY OF FOR FOREIGN EXCHANGE

Foreign currencies flow into the domestic economy due to the following reason.

EQUILIBRIUM IN THE FOREIGN EXCHANGE MARKET

Demand and supply of US$

Managed Floating: This is the combination of fixed and flexible exchange rate. Under this, country manipulates the exchange rate to adjust the deficit in the B.O.P by following certain guidelines issued by I.M.F.

Dirty floating: If the countries manipulate the exchange rate without following the guidelines issued by the I.M.F is called as dirty floating.

BALANCE OF PAYMENTS: MEANING AND COMPONENTS

STRUCTURE OF BALANCE OF PAYMENT ACCOUNTING

A balance of payments statement is a summary of a Nation’s total economic transaction undertaken on international account. There are two types of account.

The net value of balances of direct and portfolio investment is called the balance on capital account.

OTHER ITEMS IN THE BALANCE OF PAYMENT

They are included since the full balance of payments account must balance. These items are as follows.

The balance of payments is in a deficit if the autonomous receipts are less than autonomous payments. The monetary authorities may finance a deficit by depleting their reserves of foreign currencies, or by borrowing from I.M.F.

DISEQUILIBRIUM THE BALANCE OF PAYMENTS

There are a number of factors that cause disequilibrium in the balance of payments showing either a surplus or deficit. These causes are categorized into 3 factors.

Cyclical fluctuations in general business activities such as recession or depression.

Ans: Foreign exchange rate is the rate at which currency of one country can be exchanged for currency of another country.

Ans: The foreign exchange market is the market where international currencies are traded for one another.

Ans: Equilibrium exchange rate occurs when supply of and demand for foreign exchange are equal to each other.

Ans: Flexible rate of exchange is that rate which is determined by the demand and supply of different currencies in the foreign exchange market.

Ans: Appreciation of a currency occurs when its exchange value in relation to currencies of other country increases.

Ans: The spot exchange rate refers to the rate at which foreign currencies are available on the sport.

Ans: Market for foreign exchange for future delivery is known as the forward market.

Ans: Balance of payments refers to the statement of accounts recording all economic transactions of a given country with the rest of the world.

Ans: Balance of trade is the difference between the value of imports and exports of only physical goods.

Ans: Balance of Trade = Exports of goods – import of goods

Ans:- Disequilibrium in BOP is means either there is a surplus or deficit in balance of payment account.

Ans:- Autonomous items in BOP refers to international economic transaction that take place due to some economic motive such as profit maximization. These items are independent of the state of the country balance of payments.

Ans:- The other name of autonomous items in BOP is above the line item.

Ans:- A situation of deficit in BOP arise when autonomous receipts are less than autonomous payments.

Ans:- It is a system that allows adjustments in exchange rate according to a set of rules and regulations which are officially declared in the foreign exchange market.

Ans:- Manipulate the exchange rate without following the guidelines issued by IMF is called dirty floating.

Ans:- Foreign exchange is demanded for the following purposes.

Ans: – Following factors contribute to the flow of foreign exchange in to the country.

When price of foreign currency falls, imports are cheaper. So, more demand for foreign exchange by importers.

Tourism abroad is promoted as it becomes cheaper. So demand for foreign currency rises.