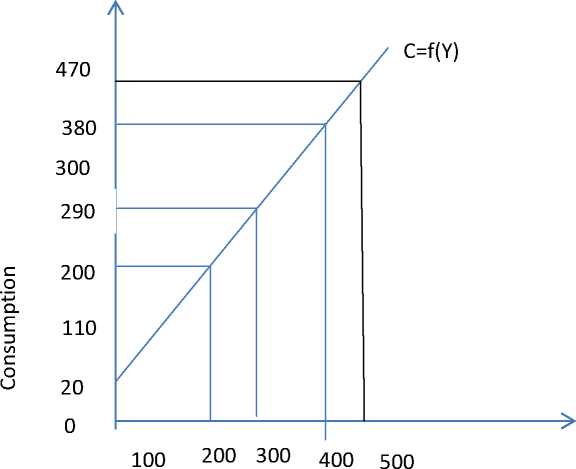 Increase in demand beyond full employment causes prices to go up.

DETERMINATION OF INCOME AND EMPLOYMENT.

In the short period price is fixed (constant) and elasticity of supply is infinite i.e., supply curve is perfectly elastic. It means the suppliers are willing to supply whatever amount of goods, consumer will demand at that price.

b= marginal propensity to consume due to unit increase in income

AD = C+I (By substituting the value of consumption function)

When final good market is in equilibrium, quantity demanded = quantity supplied AD = AS

Effects of an autonomous change on equilibrium in the product market.

The line AD1 and AD2 correspond to the values of A, via A1 and A2 respectively AS is the 45° line is equal to one

The 45° line represents point at which AD and output are equal.

At equilibrium point the equilibrium values of output and aggregate demand are OY1 and AD1.

Ans. The level of income (Y) Influences the propensity to consume (c) of an economy.

Ans. Investment means addition to the stock of capital good, in the nature of structures, equipment or inventory.

Ans. The equilibrium income is the level of income where AD=AS i.e….AD=AS and planned saving equals planned investment.

Ans. APC can be equal to one when APS =0, i.e when consumption = income.

The value of the multiplier is determined by the MPC. It is directly related to MPC.

The working of a multiplier can be explained with the help of the following table which is based on the consumption that is, AI=1000 and MPC=4/5.

The sum of total increase in income is also derived as:

Ans. Ex ante is the planned investment which the planner intends to invest at different level of income and employment in the economy.

Ex post investment may differ from ex ante investment when the actual sales differ from the planned sales and the firms thus face unplanned addition or reduction of inventories.

1. Draw a hypothetical propensity to consume curve from it draw the propensity curve to save curve

Ans. APC=C/Y APS=S/Y Propensity to save curve Is drawn from propensity to consume curve When Y=C APC=1 Till that point APS is negative at point‘s’

When y>c there is a positive saving 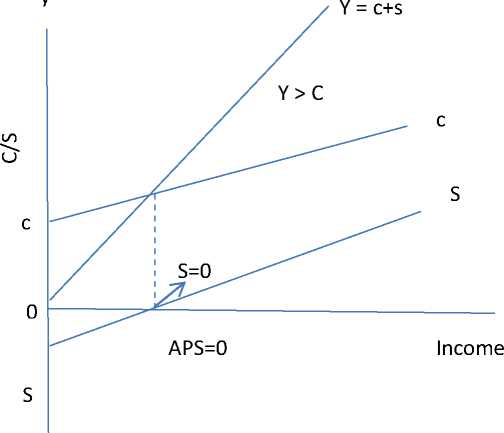 The equilibrium level of income is determined at a point when AD=AS.

The above schedule shows equilibrium level of income is 300 where AD=AS 300=300.

1. Explain the equilibrium level of income, employment and output with saving and investment approach. What happens when savings exceeds investment?

Ans. Equilibrium is achieved when planned saving is equal to planned investment that is S=I. This can be seen with the help of schedule and a diagram.

The equilibrium level of income is s 300 core and at this point S (100) =i (100) the equilibrium may necessarily not be at the full employment level. 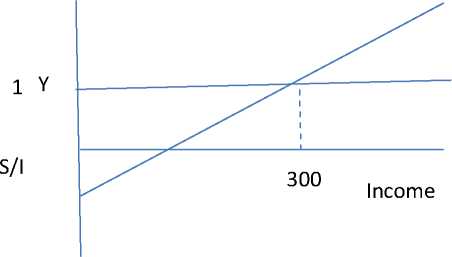 When saving exceeds planned investment means people are consuming less and spending more as a result AD is less than AS.

This will lead to accumulation of more goods with producer .this will make the businessmen to reduce production consequently, output, income & employment will be reduced till the equilibrium level of income.

2. Draw a straight line consumption curve. From it derive a saving curve explaining the process. Show on the diagram. 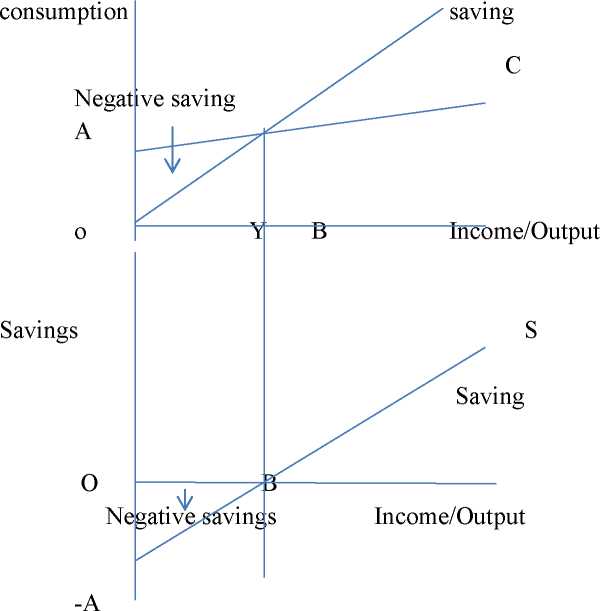 When income is 0, the economy’s consumption level is OA. The corresponding level of saving is -0A.

So -a is the starting point of saving curve. At OB level of income consumption is equal to income, so saving are zero. so B is another point on saving curve .

Join A and B and extend this line to S, AS is the saving curve.

1. If in an economy investment increases by Rs 1000 cores to Rs 1200 cores and as a result total income increases by 800 cores calculate capital MPS.

3. Calculation of APC and MPC given the level of Income and Consumption

Substituting the value of c and I we get

What will be the equilibrium level of income?

The schedule for consumption is as follows

The consumption curve is shown as

Under short run fixed price, equilibrium output and equilibrium demand at fixed price and constant rate of interest can be found with the help of following formulas Y= “A

A = Total Autonomous consumption b = MPC

Calculate the total increase in income and consumption expenditure.

Calculate the total increase in income and consumption expenditure

11 In an economy investment expenditure increased by Rs.700 crores. The marginal propensity to consume is 0.9 calculate total increase income and consumption expenditure