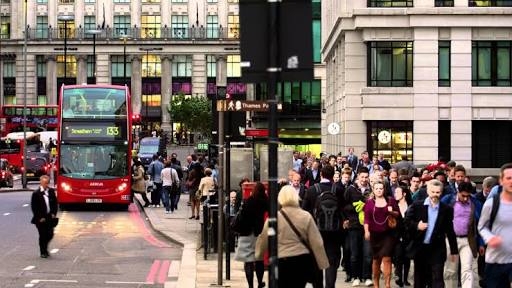 Motion, as the word itself says, is the movement of different living and non-living things. We see birds flying, people moving, cars running – all of which are different types of motions that we come across in our everyday life. What can we study about motion? Why is the study of motion included in the study of physics? Let us go through this chapter to understand this.

How do we know that something is in motion or not? Before we discuss this topic furthermore, let us talk about two familiar terms that are necessary to know about in this chapter

Motion: The state in which an object (or person) is moving is called the state of motion.

Rest: The state in which an object (or person) is not moving is called the state of rest. So, for an object that is simply lying on the ground, we say that the object is in a state of rest.

Origin: The origin is a reference point which is used to determine the state and location of an object. An object can be near, far, beside, below or above that reference point (or origin).

Suppose, the object starts its journey from O, which is treated as its reference point or origin. Then A, B and C represent the position of that object at different intervals. Now, first the object moves towards A, passing the points C and B in its way. Then, it moves back along the same path and reaches at C passing through B.

The numerical value of a physical quantity is also called its magnitude. Also, there are some terms that may appear many times in this and the next chapter:

Distance: The magnitude of length covered by an object is known as distance.

Final position: The position of an object after it has completed its movement/completed moving is called its final position. It is the position at which the object has stopped.

Can the distance and displacement be equal?

In this section, we discuss two categories of motion which are related to its speed, i.e. distance covered in unit time. Let us look at these terms:

Also, we must introduce a familiar term, called the SI unit. Many of you may know about this term, but for those who don’t know, SI unit is a unit in which a given quantity can be expressed. To understand this more clearly, look at the table of SI units of familiar quantities that is given below:

So, if an object travels a distance s in time t, the speed v is,

For example, suppose a car travels a distance of 120 km in 3 hrs, then its average speed v is 120/3 = 40 km/h. The car might not have travelled at 40 km/h at all the time and sometimes it may have been faster or slower, but this is the average speed of the car.

If an object is moving along a straight path, we can express the magnitude of its rate of motion in terms of its average velocity.

Suppose the velocity of an object is changing at a uniform rate, then the average velocity can be given by finding the arithmetic mean of the initial velocity and the final velocity for a given period of time.

Where vav is the average velocity, u is the initial velocity and v is the final velocity of the object. SI unit of velocity is the same as that of speed i.e. m/s or m s-1.

There is another quantity called acceleration, which is used to measure the rate of change of velocity of an object per unit time. We can define acceleration as:

Now, suppose the velocity of an object changes from initial velocity u to the final velocity v in the time t, the acceleration a is:

When an object travels equal distance in equal intervals of time, it is moving with a uniform speed. In such case the distance travelled by the object is directly proportional to the time taken. Thus for uniform speed, the distance-time graph would be a straight line.

The distance-time graph can be used to determine the speed of an object. We just need to measure the distance between two points on the given line using the y-axis and measure the time using x-axis. Then the speed v is equal to,

The distance-time graph for non-uniform speed is different from that of uniform motion as it is in the form of a curve. This graph shows the non-linear variation of the distance travelled by an object with time. 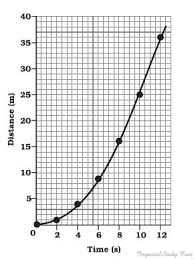 In case of uniform velocity, the height of the velocity-time graph will not change with time. It will be a straight line parallel to the x-axis. 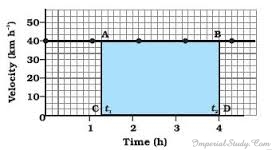 The product of the velocity and time gives the displacement of an object which is moving with a uniform velocity. So, in our graph, the area enclosed by the velocity-time graph and the time axis will be equal to the magnitude of displacement. In above graph, the distance moved by the object in time (t2-t­1) is equal to AC ×CD;

= area of rectangle ABCD which is shaded in blue colour

In the following graph, we can determine the distance travelled by the object by calculating the area of figure ABCDE under the velocity-time graph that is given below. 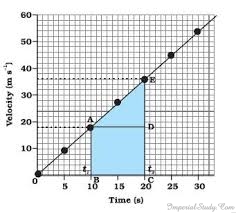 For non-uniform velocity, there is not much thing to look at except to see how these graphs do look. There are two types of such graphs available: 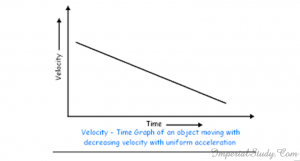 As you can see, there is not much thing to discuss about this graph as this graph is self-explanatory.

2. Non-uniform variation of velocity of an object with time 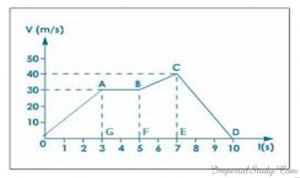 However, in the above graph you can see that the non-uniform motion has been represented by zigzag lines which is divided into several parts. You can easily find out the magnitude of distance by calculating Area of ( triangle AOG + rectangle ABFG + trapezium BCEF + triangle CDE ).

When an object is moving along a straight line with uniform acceleration, then its velocity, acceleration during the motion and the distance covered by it in a certain time interval can be related with the help of certain equations which are known as the equations of motion. These equations are:

These three equations can be represented using the graph which is given below: 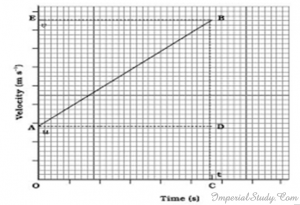 Now, again in the same graph we can take the distance s as:

s = area of OABC (which is a trapezium)

Again in the same graph, we have,

Now we have come to the last topic of our first physics chapter of class 9th i.e. uniform circular motion. Since there are a lot of questions asked about this topic in exams, we must discuss this whole chapter little by little breaking it into various subtopics. Let us first start with the definition of this term itself:

Changing of directions during circular motion:

Change of velocity during circular motion:

Calculating the velocity during motion on a circular path:

If you take a piece of thread and tie a small piece of stone at one of its ends, then hold the other end of the thread in one hand and move the thread in a circular motion, it will be an example of an object moving in uniform circular motion. If, at any instance, you release the thread from your hand, the thread would move in a straight line which shows that the direction of motion changed at every point when the stone was moving along the circular path.

Other examples of uniform circular motion are the movement of moon and the earth, a satellite in a circular orbit around the earth, a cyclist on a circular track at constant speed and an athlete rotating his body before throwing a hammer or discuss.

So, here our first physics chapter of Motion for class 9th comes to an end. We have discussed all important topics and you need to be clear in all these topics because these are simply the basic topics and would be useful in higher studies as the higher studies are all based on these small topics that you learn in the small classes. If you have any other doubt, leave a comment or contact us using our e-mails provided in our site or go to hello@imperialstudy.com .