Statistics is the Science of collection, organization, presentation, analysis and interpretation of the numerical data.

1. Limit of the Class

The starting and end values of each class are called Lower and Upper limit.

The difference between upper and lower boundary of a class is called class interval or size of the class.

A characteristics that varies in magnitude from observation to observation. e.g., weight, height, income, age, etc, are variables.

The number of times an observation occurs in the given data, is called the frequency of the observation.

A frequency distribution in which data are arranged in classes groups which are not exactly measurable.

(i) Histogram To draw the histogram of a given continuous frequency distribution, we first mark off all the class intervals along X-axis on a suitable scale. On each of these class intervals on the horizontal axis, we erect (vertical) a rectangle whose height is proportional to the frequency of that particular class, so that the area of the rectangle is proportional to the frequency of the class.

If however the classes are of unequal width, then the height of the rectangles will be proportional to the ratio of the frequencies to the width of the classes. 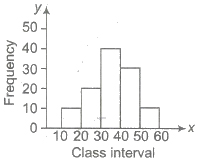 (ii) Bar Diagrams In bar diagrams, only the length of the bars are taken into consideration. To draw a bar diagram, we first mark equal lengths for the different classes on the axis, i.e., X-axis.

On each of these lengths on the horizontal axis, we erect (vertical) a rectangle whose heights is proportional to the frequency of the class. 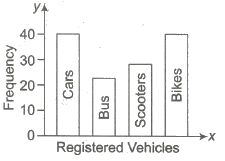 And in order to get the angles of the desired sectors, we divide 360° in the proportion of the various relative frequencies. That is, 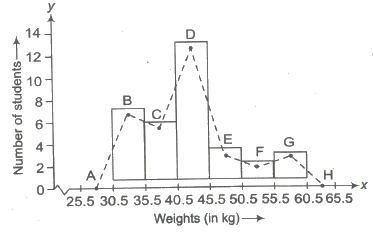 (v) Cumulative Frequency Curve (Ogive) Ogive is the graphical representation of the cumulative frequency distribution. There are two methods of constructing an Ogive, viz (i) the ‘less than’ method (ii) the ‘more than’ method. 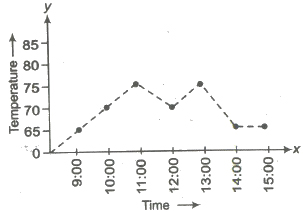 Generally, average value of a distribution in the middle part of the distribution, such type of values are known as measures of central tendency.

The following are the five measures of central tendency

The arithmetic mean is the amount secured by dividing the sum of values of the items in a series by the number.

For a classified data, we take the class marks x1, x2,…, xn of the classes as variables, then arithmetic mean

where, A1 = assumed mean

Ar = AM of collection xr

If w be the weight of the variable x, then the weighted AM

Σ wd = sum of products of the deviations and weight

(i) Mean is dependent of change of origin and change of scale.

(ii) Algebraic sum of the deviations of a set of values from their arithmetic mean is zero.

(iii) The sum of the squares of the deviations of a set of values is minimum when taken about mean.

If their corresponding frequencies f1, f2,…, fn respectively, then

The median of a distribution is the value of the middle variable when the variables are arranged in ascending or descending order.

Median (Md) is an average of position of the numbers.

Firstly, arrange the terms in ascending or descending order and then find the number of terms n.

(iii) This value of the variable is the median.

If in a continuous distribution, the total frequency be N, then the class whose cumulative frequency is either equal to N / 2 or is just greater than N / 2 is called median class.

For a continuous distribution, median

where, l = lower limit of the median class

f = frequency of the median class

C = cumulative frequency of the class just before the median class

h = length of the median class

h = the length of the first quartile class

where symbols have the same meaning as above only taking third quartile in place of first quartile.

The mode (Mo) of a distribution is the value at the point about which the items tend to be most heavily concentrated. It is generally the value of the variable which appears to occur most frequently in the distribution. 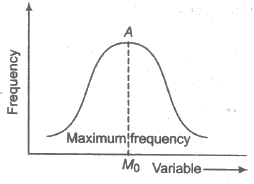 Where, 1 = lower limit of the modal class

f0 = frequency of the modal class

f1 = frequency of the pre-modal class

f2 = frequency of the post-modal class

h = length of the class interval

Relation between Mean, Median and Mode

A distribution is symmetric, if the same number of frequencies is found to be distributed at the same linear teance on either side of the mode. The frequency curve is bell shaped and A = Md = Mo 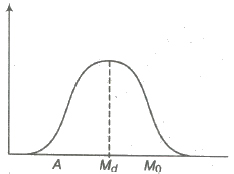 In anti-symmetric or skew distribution, the variation does not have symmetry.

(i) If the frequencies increases sharply at beginning and decreases slowly after modal value, then it is called positive skewness and A > Md > Mo. 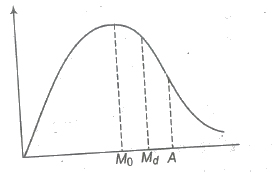 (ii) If the frequencies increases slowly and decreases sharply after modal value, the skewness is said to be negative and A < Md < Mo.

The degree to which numerical data tend to spread about an average value is called the dispersion of the data. The four measure of dispersion are

The difference between the highest and the lowest element of a data called its range.

It is widely used in statistical series relating to quality control in production.

The arithmetic mean of the absolute deviations of the values of the variable from a measure of their Average (mean, median, mode) is called Mean Deviation (MD). It is denoted by δ.

Here, x is for class mark of the interval.

Note The mean deviation is the least when measured from the median.

It is the ratio of MD and the mean from which the deviation is measured. Thus, the coefficient of MD

Standard deviation is the square root of the arithmetic mean of the squares of deviations of the terms from their AM and it is denoted by σ.

The square of standard deviation is called the variance and it is denoted by the symbol σ2.

Here, x is class mark of the interval.

Standard Deviation of the Combined Series

Effects of Average and Dispersion on Change of origin and Scale

Important Points to be Remembered

(iii) The distribution for which the coefficient of variation is less is called more consistent.

(v) Standard deviation is independent of change of origin, but it is depend on change of scale.

The square root of the AM of squares of the deviations from an assumed mean is called the root mean square deviation. Thus,

Important Points to be Remembered

(i) The RMS deviation is the least when measured from AM.

(ii) The sum of the squares of the deviation of the values of the variables is the least when measured from AM.

The tendency of simultaneous variation between two variables is called correlation or covariance. It denotes the degree of inter-dependence between variables.

If the two variables vary in such a manner that their ratio is always constant, then the correlation is said to be perfect.

If an increase of decrease in one variable corresponds to a decrease or increase in the other, then correlation is said to be negative.

where, x and y are mean of variables x and y.

The correlation coefficient r(x, y) between the variable x and y is given

(ii) If r = 1, the coefficient of correlation is perfectly positive.

(iv) The coefficient of correlation is independent of the change in origin and scale.

(v) If -1 < r < 1, it indicates the degree of linear relationship between x and y, whereas its sign tells about the direction of relationship.

(vii) If r = 0, x and y are said to be uncorrelated. It does not imply that the two variates are independent.

(ix) Rank Correlation (Spearman’s) Let d be the difference between paired ranks and n be the number of items ranked. The coefficient of rank correlation is given by

(a) The rank correlation coefficient lies between – 1 and 1.

(b) If two variables are correlated, then points in the scatter diagram generally cluster around a curve which we call the curve of regression.

(x) Probable Error and Standard Error If r is the correlation coefficient in a sample of n pairs of observations, then it standard error is given by

The term regression means stepping back towards the average.

(ii) Line of regression of x and y,

(iv) Angle between two regression lines is given by

Properties of the Regression Coefficients

(i) Both regression coefficients and r have the same sign.

(ii) Coefficient of correlation is the geometric mean between the regression coefficients.

(iv) Regression coefficients are independent of the change of origin but not of scale.

(v) If two regression coefficient have different sign, then r = 0.