Question 2. If an atom contains one electron and one proton, will it carry any charge or not?
Answer: The atom will be electrically neutral as one – ve charge balances one + ve charge.

Question 3. Draw a sketch of Bohr’s model of an atom with three shells.
Answer:

Question 2. Helium atom has an atomic mass of 4 u and two protons in its nucleus. How many neutrons does it have?
Answer:

Ncert Textbook Page 52
Question 1. How will you find the valency of chlorine, sulphur and magnesium?
Answer:

Question 2. With the help of given Table 4.1, find out the mass number of oxygen and sulphur atom.
Table: Composition of Atoms of the First Eighteen Elements with Electron Distribution in Various Shells 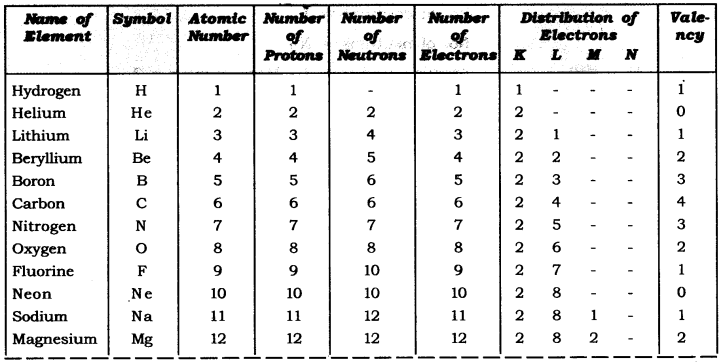 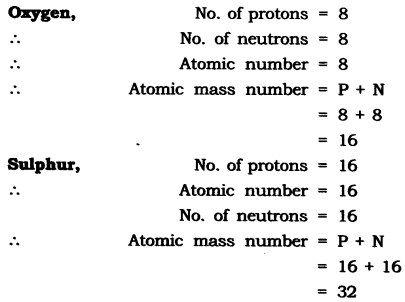 Ncert Textbook Page 53
Question 1. For the symbol H, D and T tabulate three sub-atomic particles found in each of them
Answer: 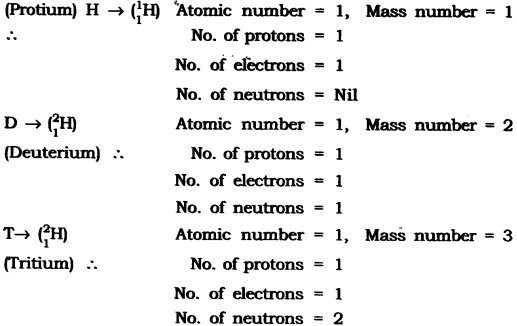 Question 2. Write the electronic configuration of any one pair of isotopes and isobar.
Answer. Isotopes: Atoms of same element having same atomic number but different mass number.

Question 1. Compare the properties of electrons, protons and neutrons.
Answer:

Question 3. What are the limitations of Rutherford’s model of the atom?
Answer: According to Rutherford’s model of an atom the electrons are revolving in a circular orbit around the nucleus. Any such particle that revolves would undergo acceleration and radiate energy. The revolving electron would lose its energy and finally fall into the nucleus, the atom would be highly unstable. But we know that atoms are quite stable.

Question 4. Describe Bohr’s model of the atom.
Answer: Bohr’s model of the atom
(1) Atom has nucleus in the centre.
(2) Electrons revolve around the nucleus.
(3) Certain special orbits known as discrete orbits of electrons, are allowed inside the atom.
(4) While revolving in discrete orbits the electrons do not radiate energy.
(5) These orbits or shells are called energy levels.
(6) These orbits or shells are represented by the letters K, L, M, N or the numbers n = 1, 2, 3, 4 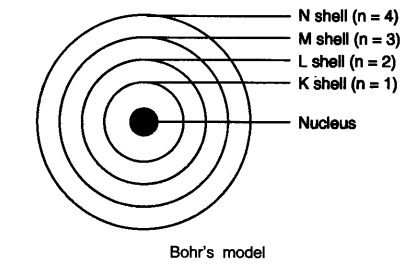 Question 5. Compare all the proposed Bohr’s models of an atom given in this chapter.
Answer: 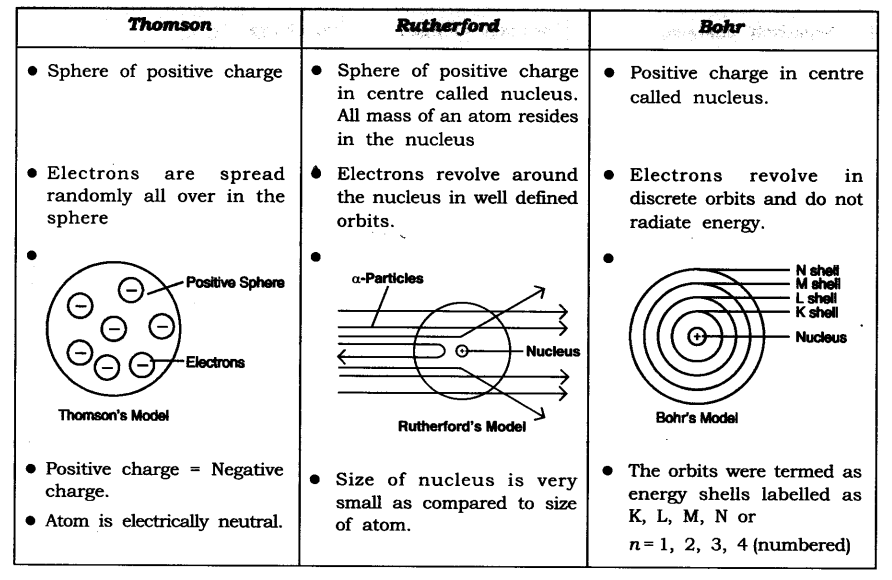 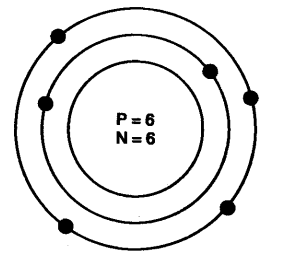 (iii) Isotopes: Isotopes are atoms of the same element which have different mass number but same atomic number.

Both calcium and argon have same mass number but different atomic number.
Two uses of isotopes are:
(i) An isotope of iodine is used in the treatment of goitre.
(ii) An isotope of uranium is used as a fuel in nuclear reactors. 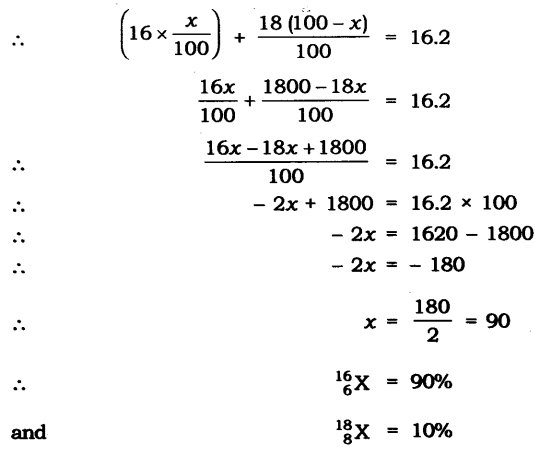 Question 14. For the following statements, write T for True and F for False.
(a) J.J. Thomson proposed that the nucleus of an atom contains only nucleons.
(b) A neutron is formed by an electron and a proton combining together. Therefore,it is neutral.
(c) The mass of an electron is about 1/2000 times that of proton.
(d) An isotope of iodine is used for making tincture iodine, which is used as a medicine.
Answer: (a) False (b) False
(c) True (d) False

Put tick against correct choice and cross (x) against wrong choice in questions 15, 16 and 17.
Question 15. Rutherford’s alpha-particle scattering experiment was responsible for the discovery of
(a) Atomic nucleus (c) Proton
(b)Electron (d)neutron
Answer: (a) Atomic nucleus

9. The elements with same valence electrons and form same type of ions 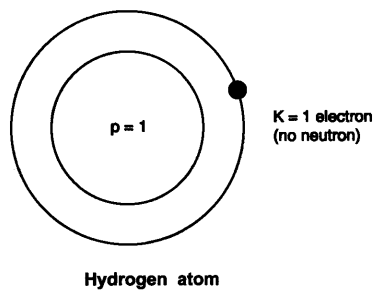 Question 2. Why are some elements chemically inert?
Answer: Because their outermost shell is completely filled.

Question 3. Why is atom electrically neutral?
Answer: It has same number of protons and electrons, (positive charge = negative charge).

Question 8. Where is the mass of atoiji concentrated?
Answer: Mass of an atom is concentrated in nucleus. 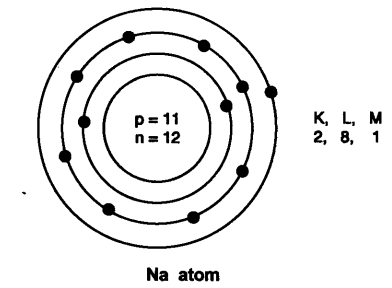 Question 11. Name the isotope used for treatment of cancer.
Answer: Isotope of cobalt.

Question 2. What is the contribution of Bohr and Bury together in the structure of atom’s explanation?
Answer: Both Bohr and Bury gave the distribution of electrons into different atoms by giving the formula 2n2, where n = shell number. 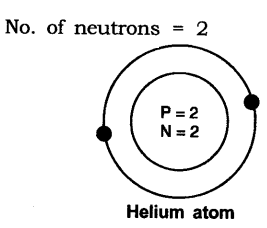 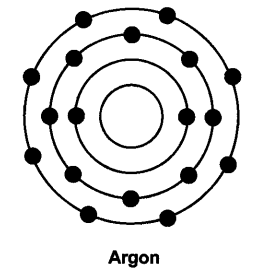 Question 6. Pick up the isotopes among the following and state reason.

Answer: The isotopes are 3517X and 3717X as both the atoms show same atomic number but different mass number.

Question 7. Pick up atoms which have same number of neutrons from the following:

Question 11. Atomic Mass exists as whole number, why do we write the atomic mass of chlorine as 35.5 u.
Answer: Chlorine has two isotopes and the mass of an atom is taken as the average mass of all the naturally occurring atoms of that element.

Question 12. Give difference between isotopes, and isobars.
Answer:

Question 14. An atom is electrically neutral, on loss or gain of electrons why does it become charged?
Answer: An atom is electrically neutral because of same number of protons and electrons. But it becomes charged, to become stable atom, loses or gains electrons. Hence,
Number of protons ≠ Number of electrons
If it loses electrons p > e; hence +ve charge is obtained.
If it gains electrons e > p; hence -ve charge is obtained.

Some atoms also show zero valency when there outermost shell is completely filled.

Question 16. With the help of an activity in daily life, how can you prove that atoms are divisible.
Answer: Activity

Conclusion: This activity shows that atom contains charges and these charges are opposite in nature which shows the attraction. Hence here scale and paper both are oppositely charged and hence attract each other. Also, every atom has at least one sub-atomic particle.

Question 17. In the structure of an atom why are protons present in the centre and are not pulled outside by the electrons as both are oppositely charged with same unit of charge?
Answer: Protons are heavy with mass 1 unit and hence are concentrated in the centre
of the atom. The mass of electrons is negligible i.e.1/1800 times less than that of protons. Hence are not able to attract the protons and pull them out of the nucleus, although their charge is of same value.

Question 18. According to you, among the structure of atom studied which model is correct and why?
Answer: Bohr’s model of an atom is the best model and is correct because it gives the explanation of nucleons (protons and neutrons) in the centre and how electrons revolve around the nucleons in their discrete, special orbits, so electrons don’t loose/radiate energy and remain bonded in their shell.

IV. Long Answer Type Questions
Question 1. Give an activity to understand the implications of Rutherford’s a scattering experiment by a gold foil.
Answer: To understand the implications of Rutherford’s a-particle scattering experiment:
Activity: Let a child stand in front of a wall with his eyes closed. Let him throw stones at the wall from a distance. He will hear sound for each strike of stone on the wall. This is like a nucleus of the atom. But if a blind-folded child has to throw stones at a barbed-wire fence, most of the stones would not hit the fencing and no sound would be heard.
This is because there are lots of gap in the fence which allows the stone to pass through them. This is like empty space in an atom through which a-particles will pass through. Based on the above activity and similar reasoning Rutherford concluded the a-particle scattering experiment as:
(1) Most of the space inside the atom is empty as a-particles passed through the foil.
(2) Very few particles deflected from their path, this show that positive charge occupies less space.
(3) A very small fraction of a-particles are deflected by 180°, this shows that all the positive charge and mass of the gold atom were concentrated in a very small volume within the atom.

Question 2. What are isotopes? State its characteristics, give uses of isotopes?
Answer: Atoms of same element with same atomic number but different mass number are isotopes.
Characteristics:
(1) Physical properties of the isotopes are different e.g. mass, density.
(2) Chemical properties of the isotopes are same due to same number of electrons.
Uses:
(1) Uranium isotope is used as a fuel in nuclear reactor (U-235).
(2) Cobalt isotope is used for treatment of cancer (Co-60).
(3) Iodine isotope is used in the treatment of goitre. 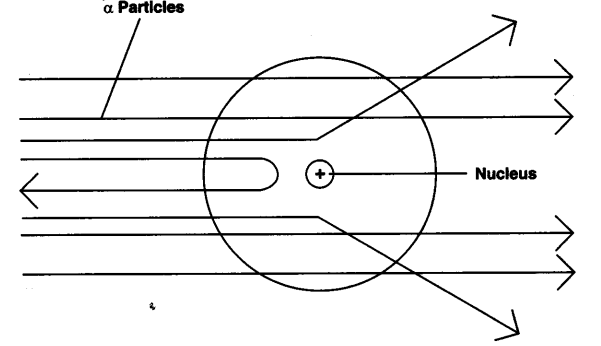 Observations:
(1) Most of the α-particles passed straight through the foil.
(2) Some of the α-particles were deflected by small angles by the foil.
(3) One out of every 12000 particles rebounded.
Conclusion from observation:
(1) Most of the space inside the foil is empty.
(2) Positive charge of atom occupies very less space.
(3) Mass of the atom is concentrated in the centre with all positive charge concentrated in small volume within the atom.

V. Value – Based Questions
Question 1. Aryan could not solve the following question in the group; his group mate explained him and solved his difficulty. The question was as follows:
What information do you get from the given figure about the atomic number, mass number and valency of the given atom X’. 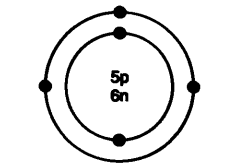 (a) What is the answer for-the above question?
(b) Name the element X’.
(c) What value of Aryan’s friend is reflected in this behaviour?
Answer: (a) The atomic number is 5.
The mass number is 11.
The valency is 3.
(b) The element X’ is boron.
(c) Aryan’s friend showed the value of helping and caring nature.