4. After reading the poem answer the following questions. 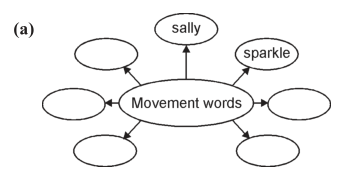 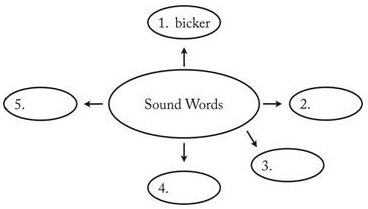 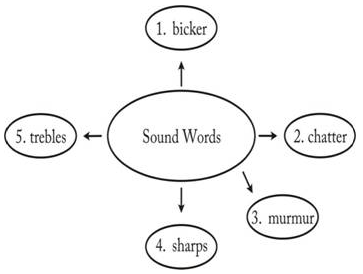 (c) A
word or a combination of words, whose sounds seems to resemble the
sound it denotes (for example: “hiss”, “buzz”,
etc.) is called onomatopoeia. From the words that you have filled in
the blurbs above, point out these words.
Answer
Bicker,
Chatter, Babble
Page No: 61
5. The
following is a flow chart showing the course of the brook. Can you
fill in the blank spaces with help from the phrases given below?

6. On the basis of your understanding of the poem, answer the following questions by ticking the correct choice.

(ii)
the death of man

(iii)
the difficulties in a man’s life

(d) In the poem, below mentioned lines:

“And here and there a lusty trout ,

And here and there a grayling”

(i) the brook is a source of life

(iii) fishes survive because of water

(iv) the brook witnesses all kinds of scenes

(i) the brook is a source of life

The
brook sparkles because of the sun’s rays which shine on its
water. The sudden emergence or rush of the brook is shown to be in a
sparkling motion.

(b) ‘Bicker’
means ‘to quarrel’. Why does the poet use this word here?

‘Bicker’
means a noisy discussion or an argument. The poet uses the word
‘bicker’ to describe the noisy flow of the brook as it
flows through the valley as it sounds like quarrel.

(c) How
many hills and bridges does it pass during is journey?

The
brook passes thirty hills and fifty bridges during its journey.

(d) Where
does it finally meet the river?

The brook finally meets the river near Phillip’s farm.

(e) Why
has the word ‘chatter’ been repeated in the poem?

The
word ‘chatter’ has been repeated in the poem because it
represents the sound frequently made by the flowing brook. It seems
that the brook talks about its journey that it has travelled
throughout in a lively mood.

(f) With
many a curve my banks I fret’- What does the poet mean by this
statement?

The brook becomes tired occasionally as it has to curve and move round and round, again and again.

(g) ‘I
wind about, and in and out.’ What kind of a picture does this line
create in your mind?

The
brook does not flow in a straight line but veers and twists itself along its
way. It creates a picture offlowing waters of the
brook resembling a maze or whirlpool.

(h) Name
the different things that can be found floating in the brook.

The
different things that can be found floating in the river are pumice,
flowers, wood chips, foamy flakes, bark of trees, twigs and leaves.

(i) What
does the poet want to convey by using the words ‘steal’
and ‘slide’?

By
using the words ‘steal’ and ‘slide’, the poet refers to smooth and noiseless movement of the brook.

(j) The
poem has many examples of alliteration. List five examples.

(k) ‘I
make the netted sunbeam dance.’ What does ‘the netted
sunbeam’ mean? How does it dance?

The sunrays filtering through the leaves and bushes make a net-like pattern on shallow water-pools. They are reflected on the surface of water and appear to be dancing as the water flows.

(l) What
is the ‘refrain’ in the poem? What effect does it create?

In
the referred poem, the refrain is:
‘For
men may come and men may go

But
I go on for ever.’
The repetition of the refrain emphasises the transitory nature of man and the eternal nature of the brook.


8. Read the given lines and answer the questions
I chatter, chatter, as I flow
To join the brimming river,
For men may come and men may go,
But I go on for ever.


(a) Who
does ‘I’ refer to in the given lines?
(b) How does it ‘chatter’?
(c) Why has the poet used the word ‘brimming’? What kind of a picture does it create?
(d) Explain the last two lines of the stanza.

(a) ‘I’
refers to the brook in the given lines.
(b) The brook chatters by flowing over the pebbles making a lot of meaningless noise.
(c) ‘Brimming’ means full to the brim or top. It creates an impression on our mind of the picture of a big river in flood.

(d) These
lines tell us that men have a short span of life; man is mortal and
human life is transient. The life of the brook, however, is continuous
and will never end. Nature is  immortal and can outlive man. That is why the brook says it will go on forever. The  immortal nature of the brook is contrasted with the fleeting nature of man’s life.
9. Identity
the rhyme scheme of the poem.
Answer
The rhyme scheme is ab ab cd cd …..
10. The
poem is full of images that come alive through skilful use of words.
List out any two images that appeal to you the most, quoting the
lines from the poem.

The first vivid image created by the poet is that
of the brook flowing through hills and valleys, under the
bridges and by the villages.
By thirty hills I hurry down
Or slip between the ridges
By twenty thorpes, a little town,
And half a hundred bridges.
The second striking image is that of serpent. Like flow of the brook, with flowers and fish floating on it. This image is most appealing because it is apt, colourful and poetic.


11. The
brook appears to be a symbol for life. Pick out examples of
parallelism between life and the brook.

The brook appears to be
a symbol for life, which becomes the central theme of the poem.
Various instances that can be seen in the poem which draw parallel
between brook and life.
The brook is a small stream that is born in somemountain. It grows bigger and stronger in the course of its
journey. It makes so many types of sounds as it flows through the pebbles. Its movements are also varied. It slips and slides; it steals and winds its curves and flows. It chatters and babbles, it makes musical as well as harsh sounds. The brook’s birth and growth, chattering and babbling are very much similar to the activities of a human being. The brook represents life in general. Both have an origin, a middle stage and an end. Both struggle against various adversities, odds and keep moving towards their goal. Above all, the brook represents life. Men may come and men may go, but life goes on forever. The same rule applies in the case of the brook. It keeps flowing eternally, like life.