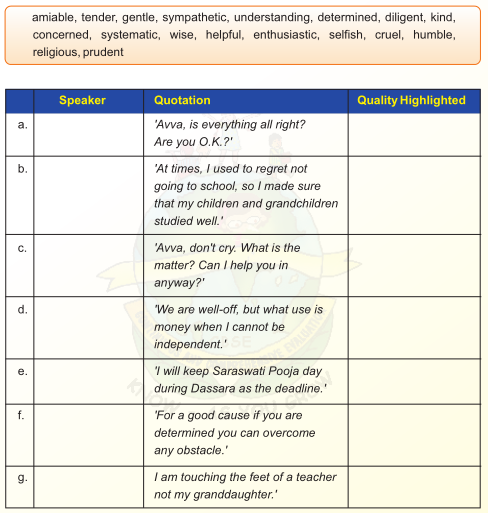 4. (a) The grandmother could relate to the central character of the story ‘Kashi Yatre’ as __________.
(i) both were old and uneducated
(ii) both had granddaughters who read to them
(iii) both had a strong desire to visit Kashi
(iv) both were determined to learn to read

(iii) both had a strong desire to visit Kashi

(b) Why did the women at the temple discuss the latest episode of ‘Kashi Yatre’?
(i) to pass their time
(ii) the writer, Triveni, was very popular
(iii) they could relate with the protagonist of the serial
(iv) women have a habit of discussing serials

(iii) they could relate with the protagonist of the serial

(d)  Why did the grandmother touch her granddaughter’s feet?
(i) As a mark of respect to her teacher
(ii) It was a custom in their family
(iii) Girls should be respected
(iv) She had read the story of ‘Kashi Yatre’ to her

(i) As a mark of respect to her teacher

5. (a) What made Triveni a popular writer?

Triveni was a popular writer because of her style of writing was very easy-to-understand and also convincing. Moreover, she used to write on the complex psychological problems in the lives of common people which was another reason of her popularity.

(b) Why did the grandmother depend on her granddaughter to know the story?

The Grandmother depended on her granddaughter to know the story for two reasons. The first one was that she did not go to school and hence she couldn’t read. The second one that she was too embarrassed to ask anyone else.

(c) Pick out two sentences which state that the grandmother was desperate to know what happened in the story.

1) I waited eagerly to return.
2) I even thought off going to the village and asking you to read for me.

(d) Could the grandmother succeed in accomplishing her desire to read? How?

Yes, The grandmother succeed in accomplishing her desire to teach her to read as she wanted to be independent so she set a deadline for herself and with determination she learnt the Kannada alphabet when she was 62 years old.

(e) Which of the following traits would be relevant to the character of the narrator’s grandmother?
(i) determined
(ii) selfish
(iii) emotional
(iv) mean
Give reasons for your choice.

(iii) emotional: When her granddaughter went to a wedding event, there was no one who can read and told the story of ‘Kashi Yatre’ as she was illiterate. She cried for her helplessness and felt upset at not being able to read.

6. Here are some direct quotations from the story. Identify the speaker and write what each quotation suggests about the speaker. You can use the adjectives given in the box and may also add your own. 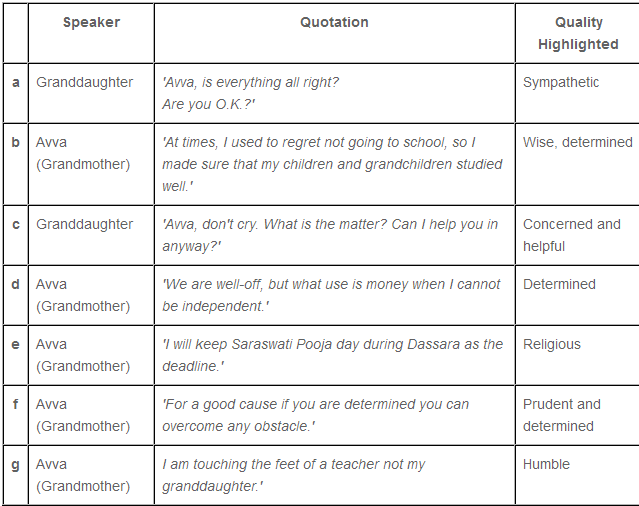