Chapter 2: Is Matter Around Us Pure

In the previous chapter, we learned about matter. In this chapter, we would discuss about mixtures, compounds, and elements. We would learn about different types of mixtures and discuss what matter is pure or not pure.

Some examples of mixture can be:

Depending upon the nature of the constituents of the mixture, a mixture can be categorized into three types:

The homogenous mixture of two or more substances is called a solution. In a solution, all the particles of the constituents are evenly distributed within the mixture. The components of a solution are the solvent and the solute. Some examples of solutions are:

Also we have used words solvent and solute above, which we can define as follows:

Solvent:- The component of the solution that dissolves the other component in it is called solvent. Generally, it is the component present in a larger amount.

Solute:– The component of the solution that dissolves within the solvent is called solute. Generally, it is the substance present in a smaller amount.

Keeping above points in mind, we can find some more examples regarding a solution:

Properties of a solution:-

Concentration of a solution:-

Properties of a suspension:-

Note:When the particles of a suspension settle down, the suspension breaks and it does not scatter light anymore. This explains more clearly that why we call a suspension unstable.

A colloidal solution or colloid is a heterogeneous mixture, in which the particles are uniformly spread in the solution. The particles are too small to be seen with naked eyes, but large enough to scatter a beam of light. Colloids are used in industries and also in daily life. There are two components of a colloid:

Before we talk more about colloidal solutions, let’s discuss about an important scientific phenomenon which we have been mentioning above:

This effect can also be observed when a small beam of light enters a room through a small hole. This is due to the scattering of light by the particles of dust and smoke in the air. It can also be observed when sunlight passes through the canopy of a dense forest. This is due to the mist, containing tiny droplets of water, which act as particles of colloid dispersed in air.

Properties of a colloid:-

Note:Colloids are classified according to the state i.e. solid, liquid and gas, of the dispersing medium and the dispersed phase. In the following table given below, you can see some examples of colloids that we come across in our daily life: 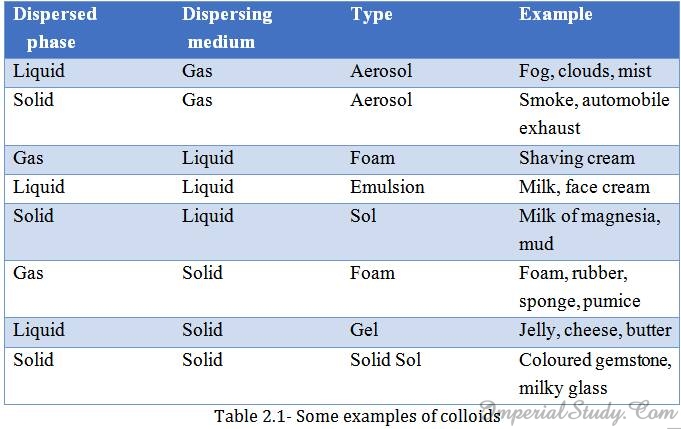 2.4- Techniques used to separate the components of a mixture

The particles of heterogeneous mixtures can be easily separated by easy methods like sieving, handpicking and filtration. However, apart from these simple techniques, there are some special techniques that can be used to separate the components of mixture. In this section, we will discuss about some of these techniques with examples.

Evaporation is a separation technique used to separate a volatile component from its non-volatile solute. This method can be used to separate coloured component (dye) from blue/black ink. Ink is a mixture of dye in water. We can observe this technique with the help of the following activity:

We have already talked about centrifugation earlier. Now we must discuss what centrifugation is and where it is used. This technique works on the principle that the denser particles are forced to the bottom and lighter particles stay at the top when spun rapidly. For this purpose, a centrifugation machine is used. (While sometimes a milk churner can also be used when the technique is used on full cream, toned or double-toned milk) Here is a small activity to understand centrifugation:

Applications/Uses of using a separating funnel (or a similar tool):-

This technique works on the principle that immiscible liquids separate out in layers depending on their densities.

Sublimation is a technique used to separate mixtures that contain a sublimable volatile component from a non-sublimable impurity. Please note that in the first chapter we have learnt that sublimation is the process of changing of state directly from solid into a gas. This process is thus also used in separation techniques. Some solids that sublime are ammonium chloride, camphor, naphthalene and anthracene. Below is a small activity to show separation of ammonium chloride and salt mixture by sublimation:

The name of this technique has been derived from the word ‘Kroma’ of Greek language which means ‘Colour’. This is due to the fact that this technique was first used in the separation of colours.

Chromatography is the technique that is used to separate those solutes which dissolve in the same solvent. Below is an activity to show how to separate different colours from black ink using chromatography:

Note:In the above activity, the ink has water as the solvent and the black ink/dye as the solute. As the water level rises, the filter paper takes along the dye particles with it. A dye is generally a mixture of two or more colours. So, the colour that is more soluble in water rises faster and the colours get separated from the black ink/dye.

In the above sections, we have discussed about separating two immiscible liquids. In this section we will discuss about a special technique called distillation that is used to separate two miscible liquids.

Distillation is used for the separation of components of a mixture containing two miscible liquids which boil without decomposition and have sufficient difference in their boiling points. Below is a small activity that shows how to separate a mixture of acetone and water with the help of distillation:

We have discussed the distillation process above. However, there is another related process called fractional distillationwhich we would discuss in this same section.

Fractional distillation is the process used to separate a mixture of two or more miscible liquids for which the difference in their boiling points is less than 25 K. Some applications of this process are the separation of different gases from the airand separation of different factions from petroleum products. The apparatus used in this process is similar to that of a simple distillation, except for that a fractionating column is fitted in between the distillation flask and the condenser.

Fractionating column:It is a tube packed with glass beads. The glass beads provide surface area for the vapours to cool and condense repeatedly.

2.4.7- Separation of different components of air

We have already discussed before that the air is a mixture of various gases like oxygen, nitrogen, hydrogen, helium etc. Is there a way to separate these gases from the air? The answer is-  fractional distillation. In the previous section, we mentioned fractional distillation. In this section, we will discuss that how this technique is used in the separation of various gases from the air around us.

Suppose we want a specific gas, say oxygen, out of the air mixture, then we simply need to separate out all the other gases present in the air. This process can be understood by the help of following steps:

The first gas that gets separated is Carbon dioxide that separates out as dry ice after the cold compressed air reaches the ‘separator’. Next gas that separates is nitrogen followed by argon that separate in the fractional distillation column. Oxygen in the form of liquid (liquid oxygen) is left behind and thus we separate oxygen from the mixture of air.

The last technique that we will discuss in this section is crystallisation. Crystallisation is a process that separates a pure solid from a solution in the form of its crystals. This method is used to purify solids. For instance, the salt we obtain from seawater is not pure and can have lots of impurities within it. For such impurities, we use the crystallisation process. We can understand this process with a simple activity:

Why the crystallisation method is better than evaporation:-

Although there may be many reasons to elaborate the answer, below are two main reasons to answer this question that has arisen:

So, these are the few techniques that are used in the separation of the components of mixture depending upon the nature of the components of the mixture. Now, it is time to discuss about an important concept which have already studied in previous classes and see how this concept is useful to understand this chapter.

So as we have discussed in the previous chapter, the concept is necessary to understand the difference between a pure substance and a mixture. Let us understand this concept with the help of few terms:

The interconversion of states (or change of state) is also a physical change because it has no effect on the chemical composition or chemical nature of that substance.

Now when we have already discussed a lot about mixtures of different substances, it is finally the time to discuss about pure substances and their types. This concept is really necessary to understand as you would be learning more about them in upcoming chapters as well as in higher classes.

On the basis of their chemical composition, we can classify the substances as elements and compounds. Let us discuss about them in detail:

An element is a basic form of matter that cannot be broken down into simpler substances by using chemical reactions. This definition of an element has been given by a French chemist, Antoine Laurent Lavoisier (1743-94). Furthermore, Robert Boyle was the first scientistthat first used the term element in 1661. Elements are generally divided into metals, non-metals and metalloids.

Metals and their properties:-Metals are hard, shiny substances that generally show some or all of these properties:

Some metals are iron, zinc, copper, gold, silver, sodium, potassium, etc. Mercury is the only metal that is liquid at room temperature.

Non –metals and their properties:- Non-metals are soft, non-conductors of heat and electricity that show some or all of these properties:

Now coming back to elements, here are some important facts about elements that you must look at:

A compound is a substance which is composed of two or more elements which are chemically combined with one another in a fixed proportion or a fixed amount. Examples of compounds are sulphur chloride, hydrogen sulphide, ammonium sulphate, and even water. You can easily conclude that in a compound, say sulphur chloride, the elements sulphur and chlorine are combined in fixed proportions

Difference between mixtures and compounds:-

Look at the following table in order to understand the difference between mixtures and compounds: 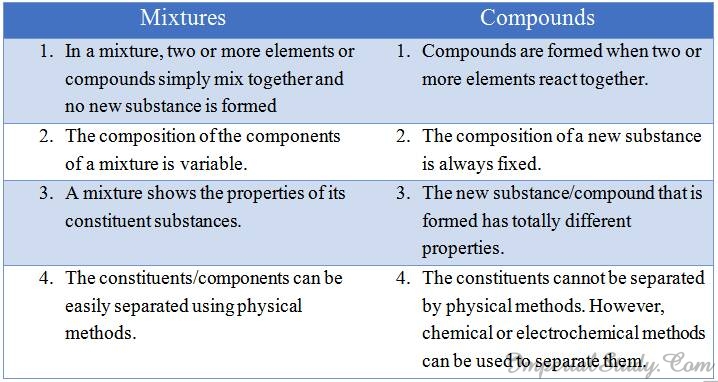 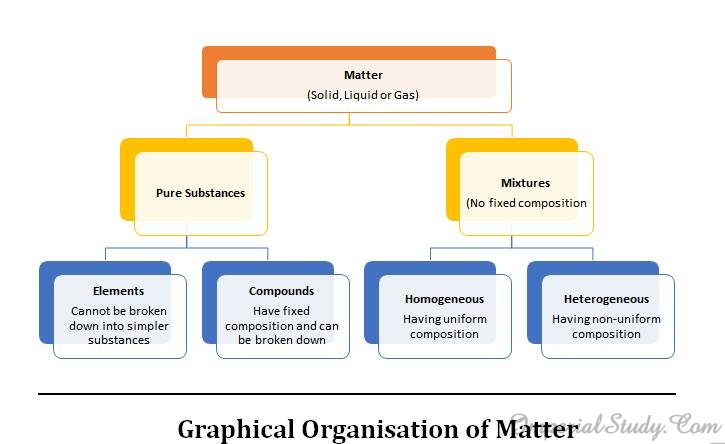