Q.1. What is the difference between multiple cropping and modern farming methods?

Under modern farming method, production is increased by using modern technology in place of traditional agricultural practices. Under this method, high yielding varieties (HYVs) of seeds are used in place of simple seeds. HYV seeds promise to produce much greater amounts of grain on a single plant. Again, chemical fertilisers are used in place of cow dung and other natural manures.

Table 1.2 : Production of pulses and wheat 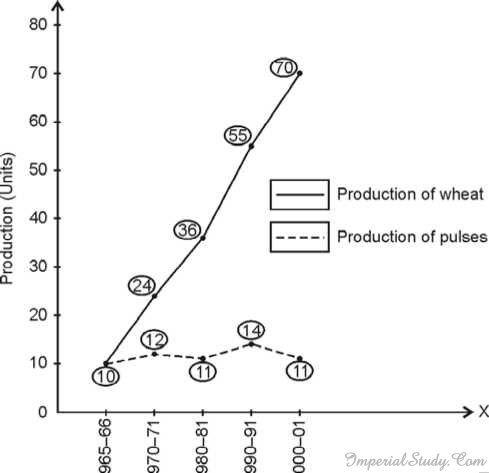 Q.4. What kind of farming methods — modern or traditional or mixed do the farmers use? Write a note.

Ans. In India, some farmers (mainly large farmers) use modern methods of farming. Farmers of Punjab, Haryana and western U.P. use these methods. However, small and marginal farmers all over the country still use traditional methods of cultivation. However, some of them have begun to use better seeds, chemical fertilisers, etc. In fact, we find farmers using modern methods along with the farmers who still use traditional methods.

Q.5. What are the sources of irrigation?

A majority of the farmers in India continue to depend on rains as source of irrigation.

Q.6. How much of the cultivated land is irrigated? (very little/nearly half/majority/all)

Q.7. From where do farmers obtain the inputs that they require?

Ans. Farmers obtain the required inputs from the traders.

Q.8. Why are farm labourers like Dala and Ramkali poor?

Ans. Both Dala and Ramkali are among the poorest people in village Palampur.

Dala is a landless farm labourer who works on daily wages. He fails to get regular work in the fields because of mechanisation of agriculture.

Similarly, Ramkali hopes to get lesser work even during the harvesting season this year. Last

year she worked for less than five months in the entire year. Due to past debt, the village moneylender has refused to give her any more loan.

So Dala and Ramkali are poor.

Q.9. Gosaipur and Majauli are two villages in north Bihar. Out of a total of 850 households in the two villages, there are more than 250 men who are employed in rural Punjab and Haryana or in Delhi, Mumbai, Surat, Hyderabad or Nagpur. Such migration is common in most villages across India. Why do people migrate? Can you describe (based on your imagination) the work that the migrants of Gosaipur and Majauli might do at the place of destination?

Ans. Some people (250 in number) of Gosaipur and Majauli have migrated to the rural areas of Punjab, Haryana, Mumbai, Nagpur etc. The migrants are employed by the large farmers of these regions either as regular workers or as daily wage workers.

Q.10. What does Tejpal Singh do with his earnings?

Ans. Tejpal Singh — a large farmer of the village — deposits most of his earnings in the bank. Then he uses this accumulated money for lending to poor farmers like Savita. He also uses this money to arrange for the working and fixed capital for cultivation.

Q.11. Let us take three farmers. Each has grown wheat on his field though the production is different (see Column 2). The consumption of wheat by each farmer family is the same (Column 3). The whole of surplus wheat this year is used as capital for next year’s production. Also suppose the production is twice the capital used in production. Complete the tables.

Q.12. (a) What capital did Mishrilal need to set up his jaggery manufacturing unit? Who provides the labour in this case?

Can you guess why Mishrilal is unable to increase his profit?

Could you think of any reasons when he might face a loss?

Why does Mishrilal sell his jaggery to traders in Shahpur and not in his village?

Mishrilal is unable to increase his profit because of high price of sugarcane.

Mishrilal sells his jaggery to traders in Shahpur because he gets a better price.

In what ways is Kareem’s capital and labour different from Mishrilal’s?

Why didn’t someone start a computer centre earlier? Discuss the possible reasons.

Mishrilal’s capital is used to produce jaggery (gur), while Kareem’s capital is used in the production of service. Similarly, Mishrilal employs unskilled labour, whereas Kareem has employed technically trained workers.

Q.1. Every village in India is surveyed once is ten years during the Census and some of details are presented in the following format. Fill up the following, based on information on Palampur.

Q.2. Modern farming methods require more inputs which are manufactured in industry. Do you agree?

Q.3. How did the spread of electricity help farmers in Palampur?

Ans. The spread of electricity has helped the farmers of Palampur village in the following ways :

Q.4. Is it important to increase the area under irrigation? Why?

Ans. India is an agricultural country. Nearly two-thirds of the people are dependent on farming for their livelihood. But of the total cultivated area in the country, a little less than 40 per cent is

irrigated even today. In the remaining areas, farming is largely dependent on rainfall which is

irregular and uncertain. Modern farming methods cannot be used in the absence of assured adequate water supplies. India cannot achieve the goal of self-sufficiency in food grains unless the area under irrigation is increased.

Q.5. Construct a table on the distribution of land among the 450 families of Palampur.

Ans. Distribution of land between the farmers of Palampur

Q.6. Why are the wages for farm labourers in Palampur less than minimum wages?

Q.7. In your region, talk to two labourers. Choose either farm labourers or labourers working at construction sites. What wages do they get? Are they paid in cash or kind? Do they get work regularly? Are they in debt?

After talking to two farm labourers it was found that —

Q.8. What are the different ways of increasing production on the same piece of land? Use examples to explain.

Ans. Ways of Increasing Production on the Same Piece of Land.

Q.9. Describe the work of a farmer with 1 hectare of land.

Ans. One hectare of land equals the area of a square with one side measuring 100 metres. A farmer who works on a piece of 1 hectare of land is treated as a small farmer. He performs the following type of activities on the field :

Q.10. How do the medium and large farmers obtain capital for farming? How is it different from the small farmers?

Farmers — Small or large require capital during production. They require both fixed capital and working capital.

The medium and large farmers have their own savings from farming. They thus are able to arrange for the capital needed. These farmers sell the surplus farm products in the market. A part of this earning is saved and used for buying capital items such as farm machinery, raw material, etc.

But small farmers have to borrow money to arrange for the capital. They borrow from large farmers or the village moneylenders or the traders who supply them various inputs for cultivation. The rate of interest on such loans is very high.

Ans. Terms of Loan : Savita is a small farmer. She plans to cultivate a small piece of land of one hectare. She does not have money to arrange for capital. So she decides to borrow from Tejpal Singh — a big farmer who belongs to the same village Palampur. Tejpal Singh gives a loan of Rs 3000 to Savita at an interest rate of 24 percent. He gives this loan for four months.

Besides, Savita also has to work on Tejpal Singh’s field as farm labourer during the harvesting season. Tejpal Singh will give her Rs 35 per day as wages. Savita agrees to all these tough conditions because she needs a loan.

Savita’s condition would have been better if she could get a loan from the bank. The bank would have provided her the loan at a low rate of interest. Moreover, Savita could have devoted more time on her own field instead of working for Tejpal Singh as farm labourer.

Q.12. Talk to some old residents in your region and write a short report on the changes in irrigation and changes in production methods during the last 30 years. (Optional)

Ans. Report on Changes in Cultivation : A survey was conducted to know about the changes that have taken place in irrigation and other production methods during the last 30 years. Some old residents of the region were contacted. The findings of the report are given as under.

The farmers reported that cultivation had gone through major changes during the last 30 years. These included :

Q.13. What are the non-farm production activities taking place in your region? Make a short list.

Non-farm activities refer to the activities other than farming which are undertaken to earn income. Different types of these activities include the following :

Q.14. What can be done so that more non-farm production activities can be started in villages? Ans. Conditions Essential for the Expansion of Non-farm Activities.

In future, there should be more and more non-farming activities in the villages. The following steps/measures may be undertaken in this regard.