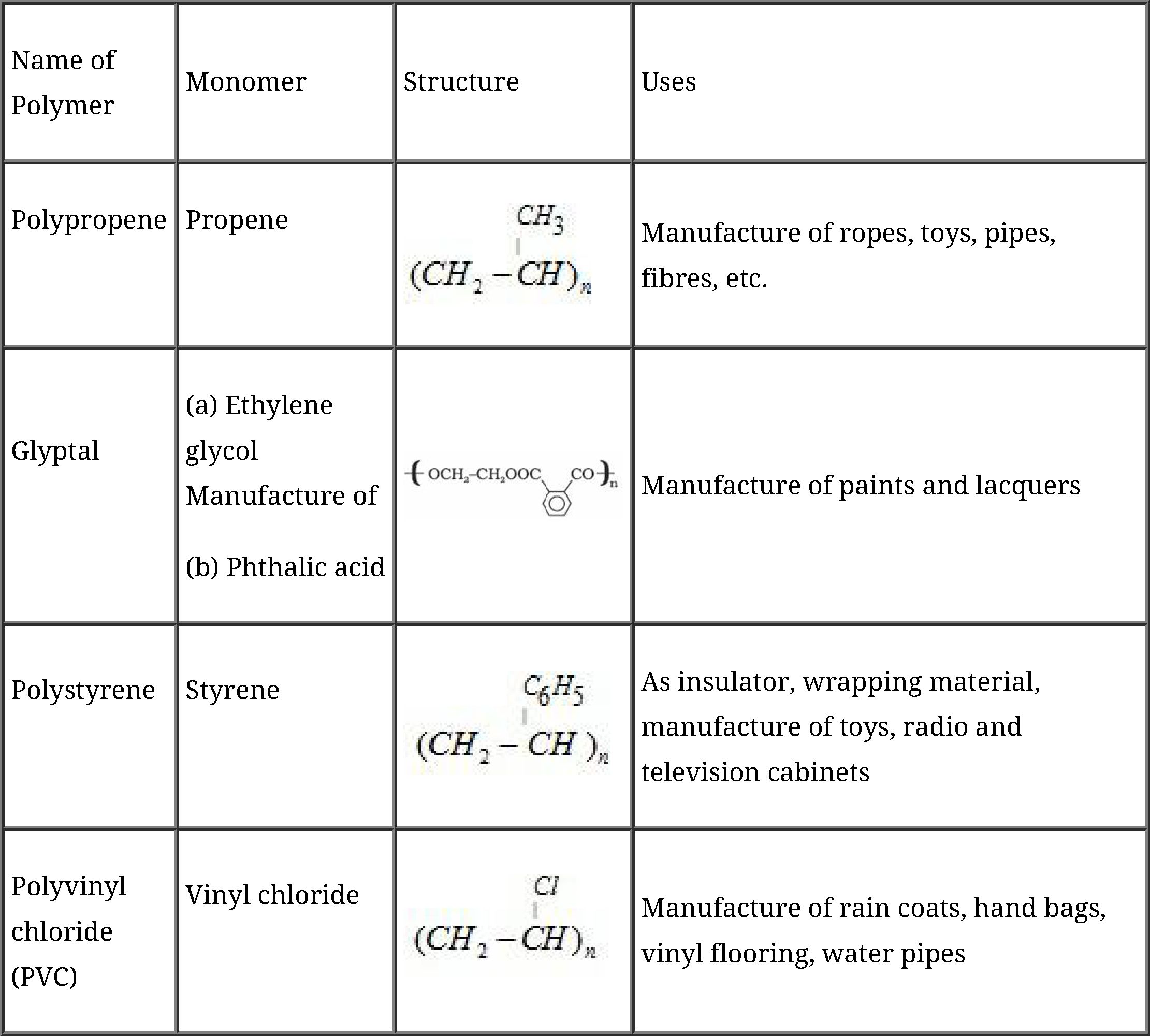 Homopolymers:Polymers formed by the polymerisation of a single monomeric species.
Examples – Polythene, Polystyrene.

Based on Molecular forces, it is classified into

Step 3: Chain terminating step: For termination of the long chain, free radicals combine in
different ways to form polythene. One mode of termination of chain is shown as under: 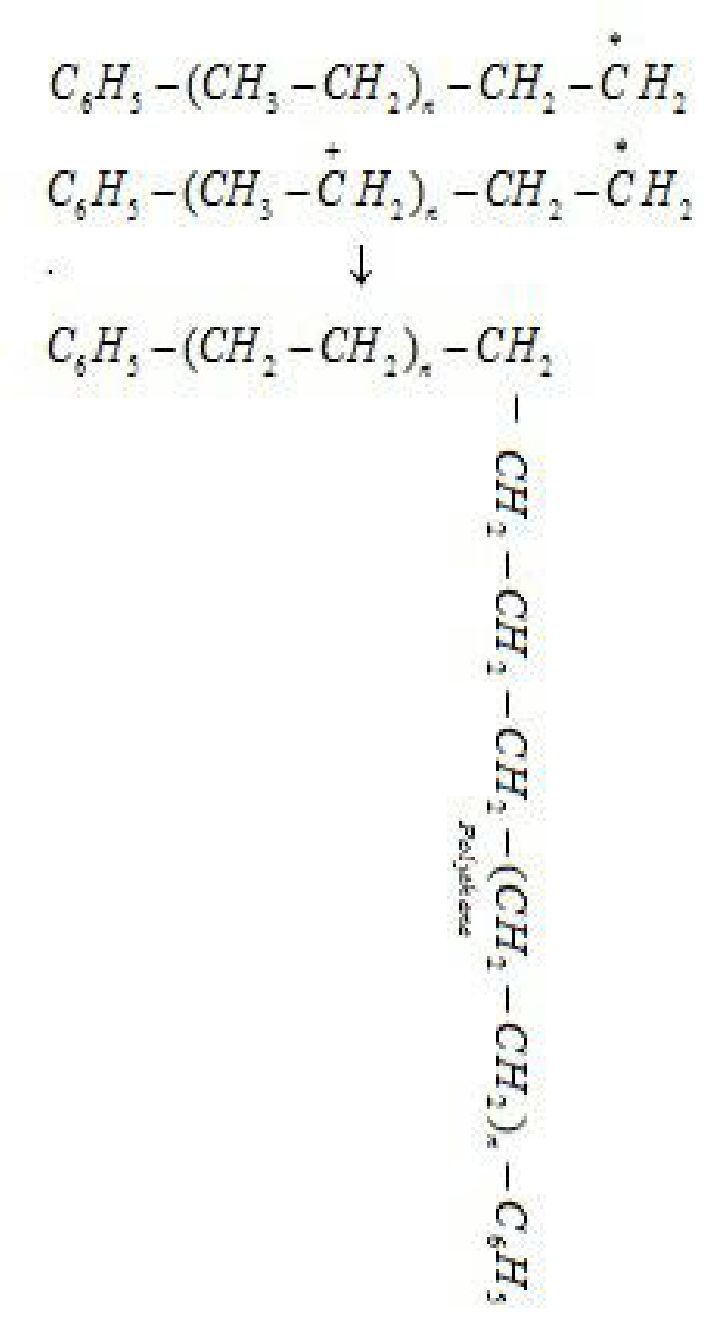 It is used in the insulation of electricity carrying wires and manufacture of squeeze bottles,
toys and flexible pipes

It is used for manufacturing buckets, dustbins, bottles, pipes, etc.

It is used as a substitute for wool in making commercial fibres such as orlon or acrilan.

(a) Nylon 6, 6: It is prepared by the condensation polymerisation of hexamethylenediamine
with adipic acid under high pressure and at high temperature.

It is used in making sheets, bristles for brushes and in textile industry. 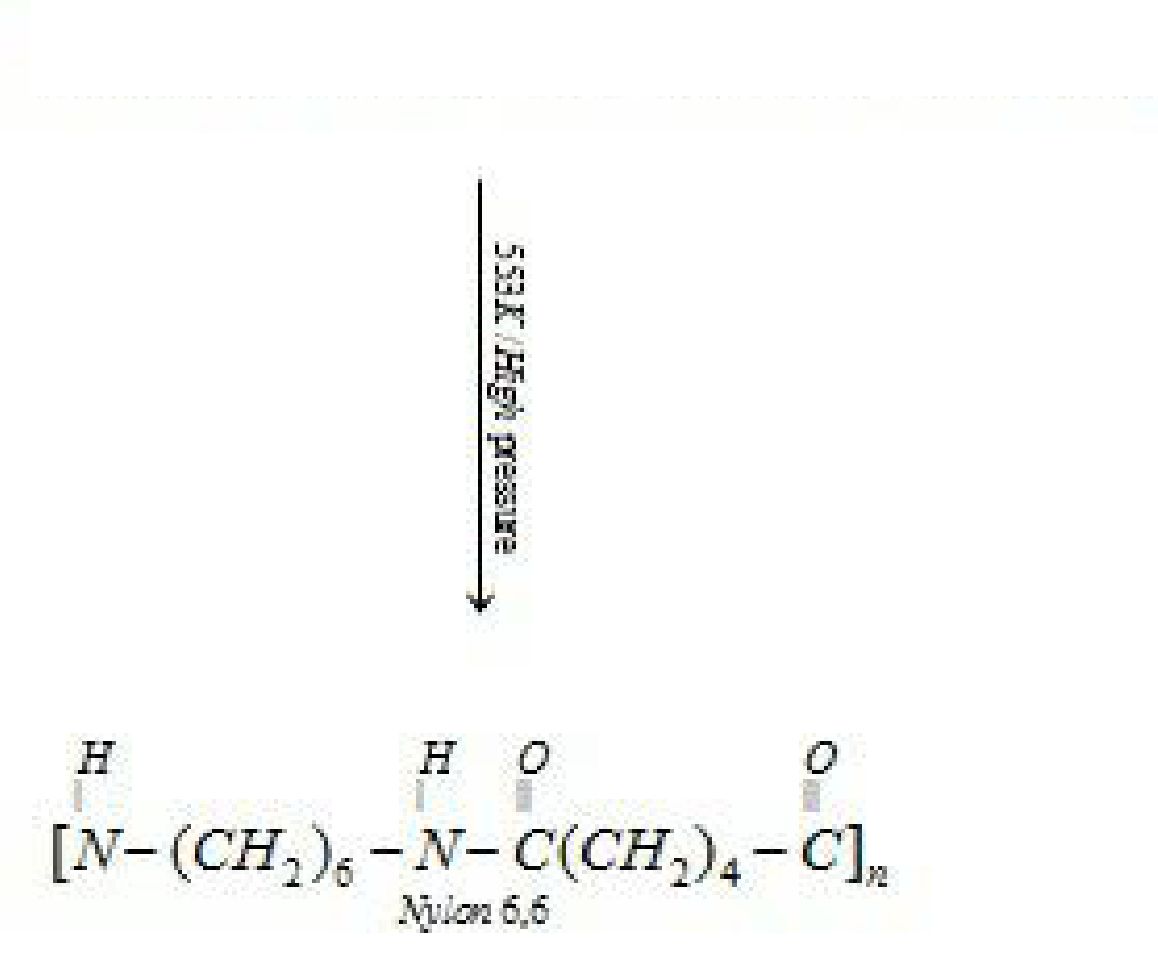 (b) Nylon 6: It is obtained by heating caprolactum with water at a high temperature

It is used for the manufacture of tyre cords, fabrics and ropes. 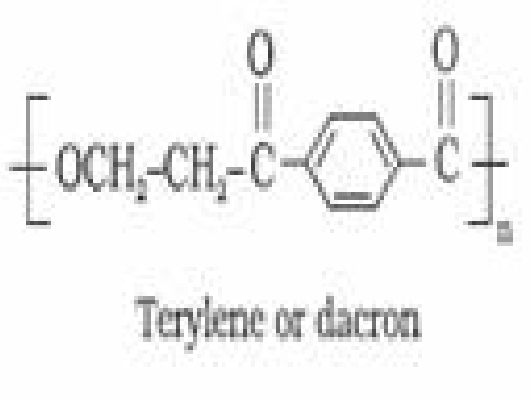 It is used to create resistance in polymerised product and is used in blending with cotton and
wool fibres and also as glass reinforcing materials in safety helmets, etc.

a). Bakelite: These are obtained by the condensation reaction of phenol with formaldehyde
in the presence of either an acid or a base catalyst. The initial product could be a linear
product – Novolac used in paints.

b). Novolac on heating with formaldehyde forms Bakelite 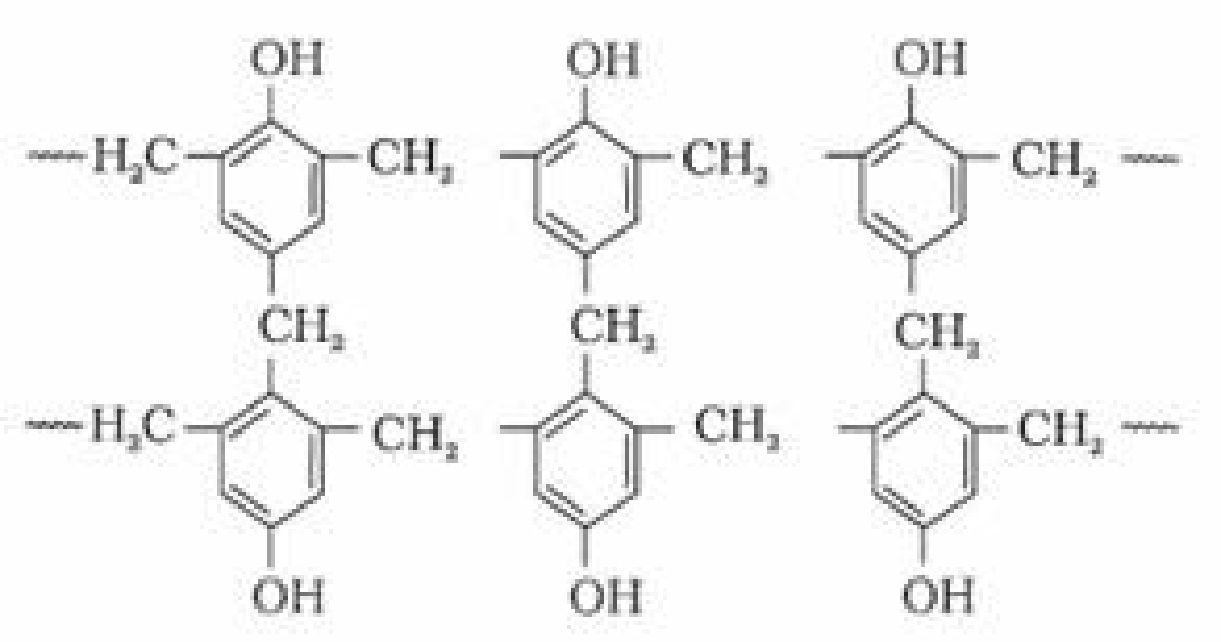 It is used for making combs, phonograph records, electrical switches and handles of various
utensils 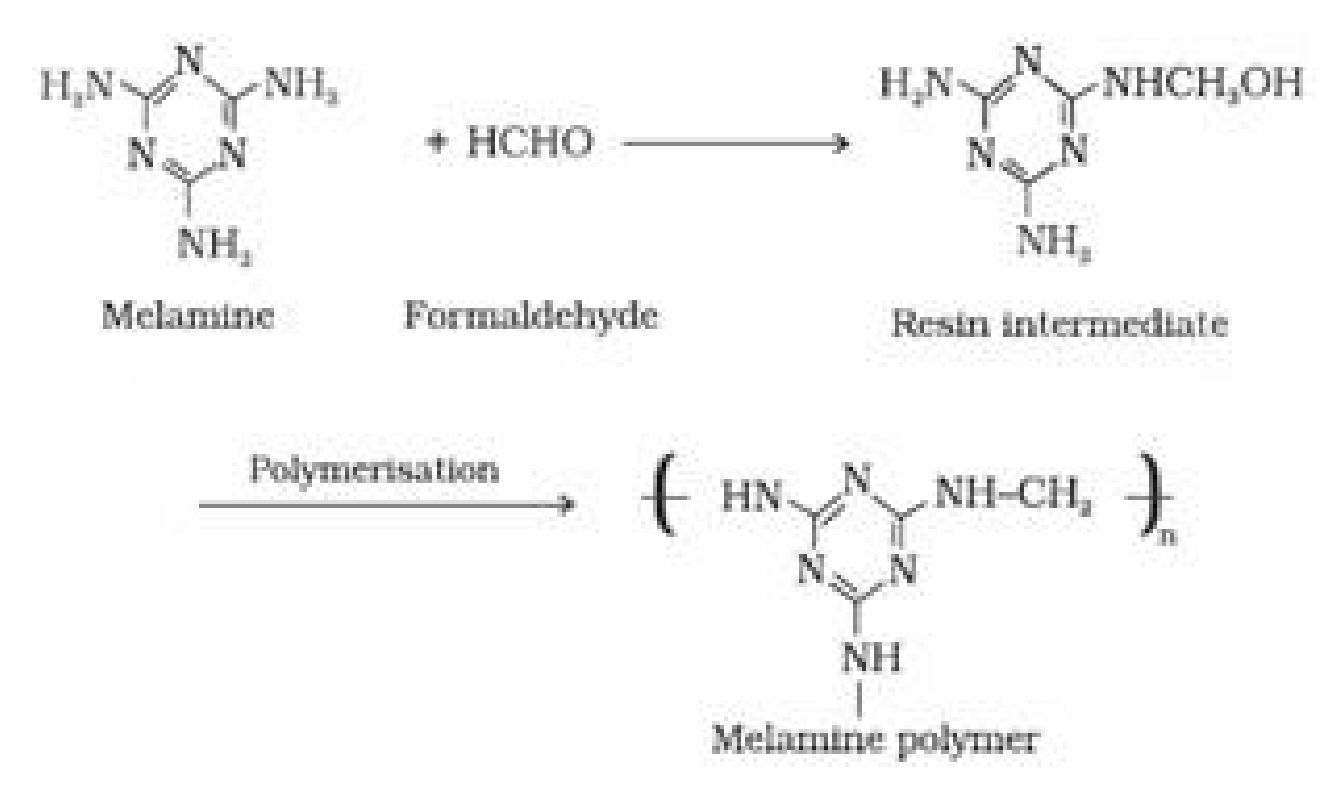 It is used in the manufacture of unbreakable crockery.

a). Natural rubber: Natural rubber is a linear polymer of isoprene (2-methyl-1, 3-butadiene)
and is also called as cis – 1, 4 – polyisoprene. 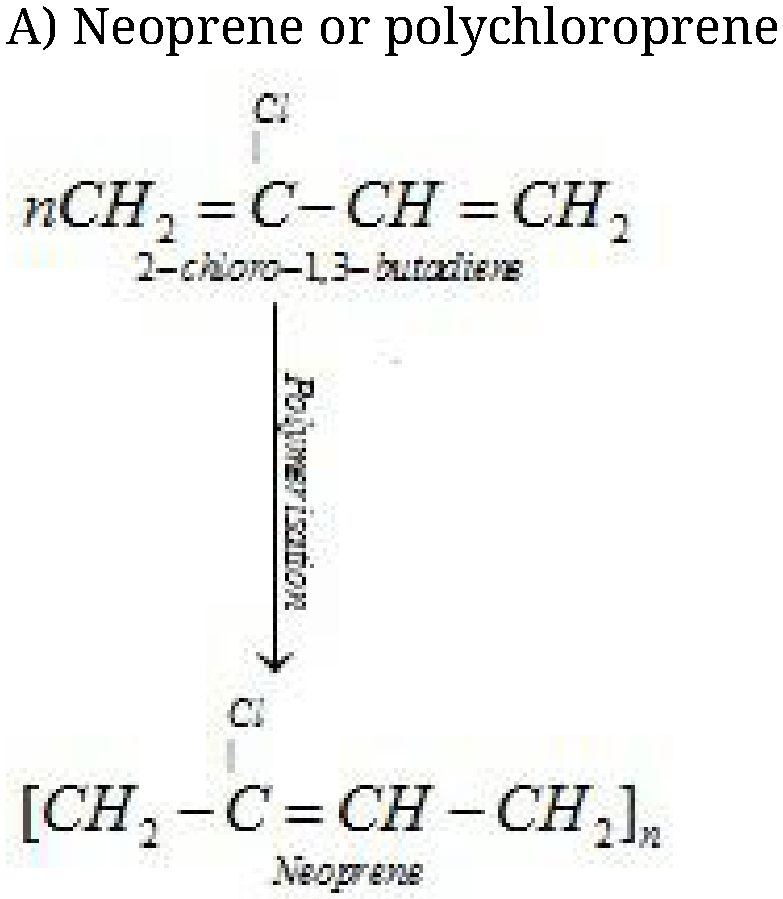 It is used for manufacturing conveyor belts, gaskets and hoses 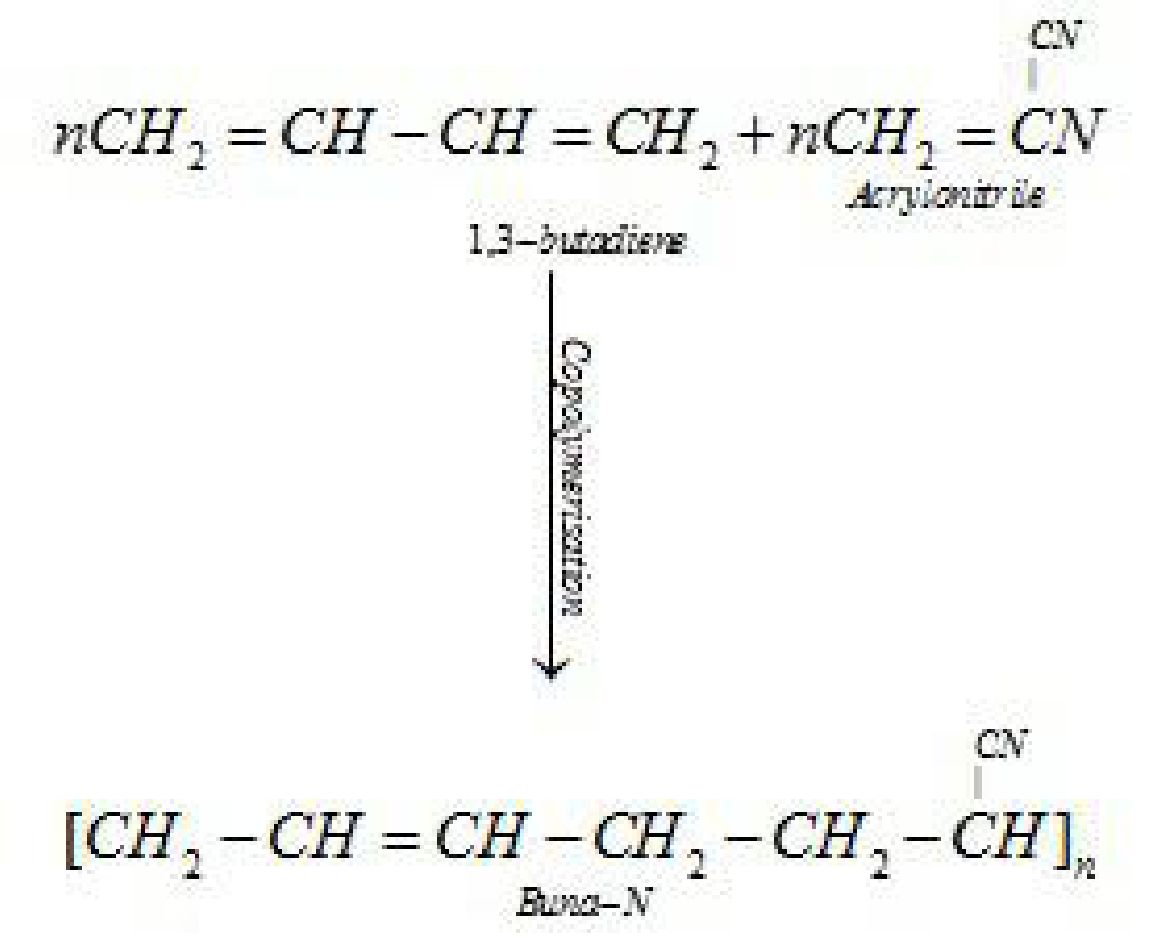 It is used in making oil seals, tank lining, etc. because it is resistant to the action of petrol,
lubricating oil and organic solvents 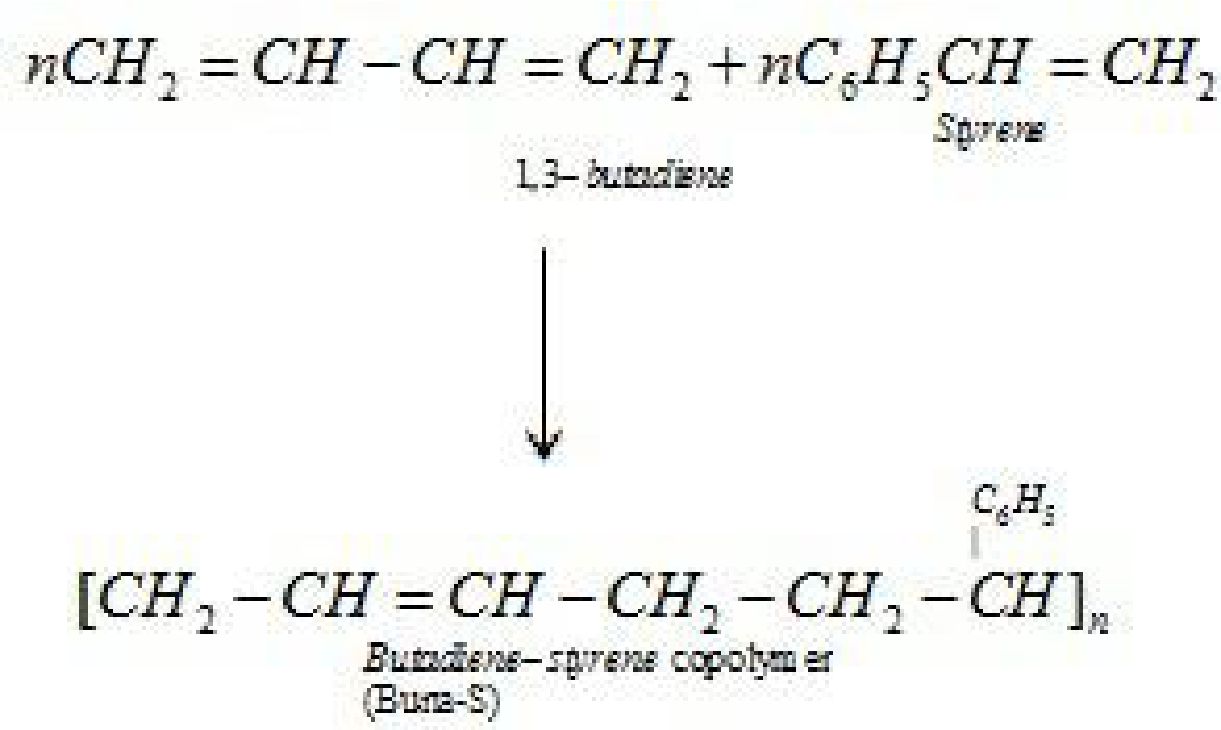 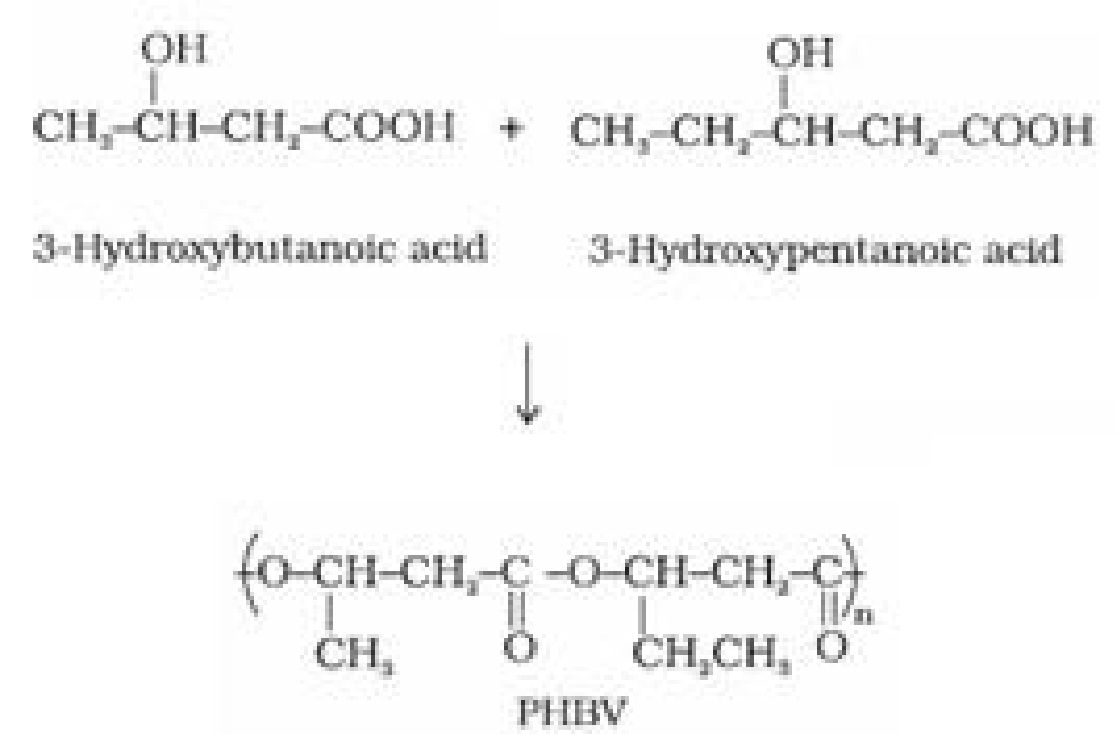 It is used in speciality packaging, orthopaedic devices and in controlled release of drugs.

b). Nylon 2-nylon 6: It is an alternating polyamide copolymer of glycine(H2N-CH2-COOH)
and amino caproic acid (H2N (CH2)5 COOH)

Terylene or Dacron: It is manufactured by heating a mixture of ethylene glycol and
terephthalic acid at 420 to 460 K in the presence of zinc acetate-antimony trioxide catalyst.

Vulcanisation of rubber: The process of heating a mixture of raw rubber with sulphur and
an appropriate additive in a temperature range between 373 K to 415 K to improve upon
physical properties like elasticity, strength etc.

Biodegradable Polymers: Polymers which are degraded by microorganisms within a suitable
period so that biodegradable polymers and their degraded products do not cause any serious
effects on environment.

Commercially important polymers along with their structures and uses: